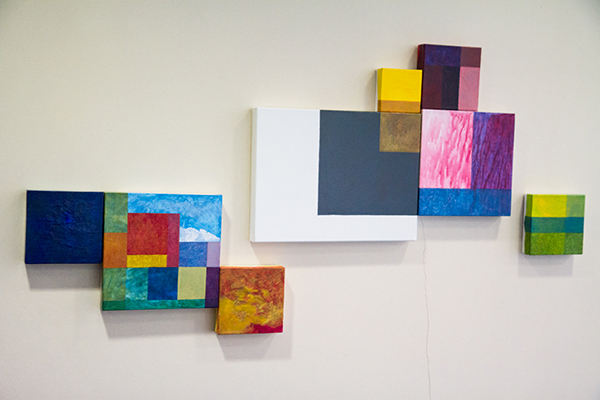 Tetris is what my mind immediately conjured up when I first saw Suel Novell’s art installation Zoom. Obviously it was a foolish and uniformed first instinct, but it’s not hard to see why I immediately leaped to that conclusion. Novell’s installation consists of a series of small, interlocked rectangular-shaped canvases, each placed a certain distance and position from one another on the wall and painted over in a variety of vivid colours and patterns. While I found them to be delightfully gaudy (and fun-sized too!), I won’t say that my attention was truly captured by the artworks. At least, not until I discovered the idea that inspired them, as well as the projection (that comprised half the installation) that I probably should’ve watched before I even went near the paintings. Oops.

The idea of nature is emphasised through the depiction of the four forces of fire, earth, air and water in the projection, which are represented in a pixellated manner that explains the cube-like form of Novell’s artworks. Novell draws a connection between pixels, the building blocks of the digital world, and atoms, their real-world equivalents, to emphasise the way in which these tiny elements constantly overlap in our daily environment, making up both the natural and man-made forms and structures around us. Looking at the rectangular artworks and the way they physically connect, it’s not difficult to see how they might represent both atoms and pixels – the latter of which means that my initial impression of Tetris wasn’t so far off after all...

If you think St Dave’s is a bit of a peculiar space in which to exhibit artwork, consider again the subject matter of Novell’s installation. Zoom effectively communicates the commingling of science and art, a union that in my opinion should occur far more often. At the very least, it might further my stunted science education.