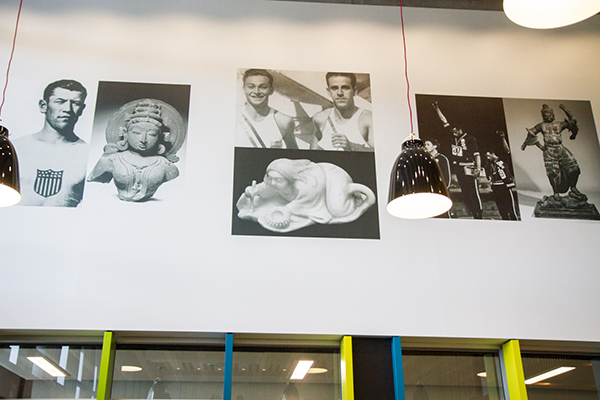 The Devil in Me

The irony of walking into Unipol for the first time ever for the sole purpose of reviewing an art installation was not lost on me. Besides being interestingly unusual, however, the setting of Siobhan Wootten’s The Tao of Avery really did make the artwork that much more impressive. Walk into Unipol expecting a painting to be just chilling in the foyer? You’ll get a bit of a shock finding three photographic artworks towering over you, imprinted onto the wall overlooking the café area.

In case you were wondering, the word “tao” means “devil”, and it is an interesting choice of words considering the juxtaposition of subject matter in the three paintings that make up Wootten’s installation. Each image features a black-and-white photograph of an Olympic athlete, official, or President of the International Olympic Committee that Avery Brundage wronged in some manner, placed alongside an image of a piece from Brundage’s own Asian art collection, which currently resides at the Asian art museum of San Francisco.

Apart from depicting a stunning visual parallel, with the art pieces mimicking the movements or positions of the subjects and vice versa, the two elements of each painting offer a more meaningful commentary on Brundage’s life and the pain he inflicted on these individuals. Brundage studied Taoism, a religious and philosophical Chinese tradition that emphasizes the harmony of opposites through the duality represented in the yin and yang symbol. This idea of opposing forces of shadow and light is reinforced through the meaningful depiction of Brundage’s actions in Wootten’s work, with the positive act of donating his artwork contrasting with the pain he caused others in his Olympic career.

The photographs themselves are incredible, and the juxtapositions make for a highly visually appealing contrast. But it’s the back story representing both the “good” and “bad” in Avery Brundage’s life which really makes the artwork come alive.