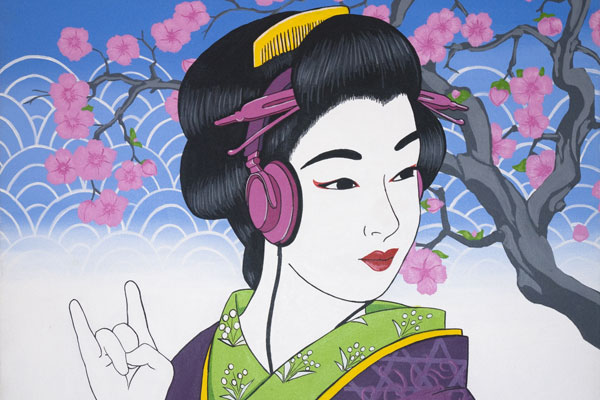 Did you hear about Frankenstein? No? Well, I heard he likes to stalk through cities full of high-rise buildings at night, sporting an Adidas jumper and a rope necklace, blasting tunes from the boom box. At least he does in the pop art-esque paintings of Lui Petti; though I’m not sure his original creator Mary Shelley would completely agree.

Pop art’s not exactly a new thing. I feel like everyone today is generally quite familiar with the 1950s art movement, and consequently has a kind of “been there, seen that” attitude towards it, which is fair enough. The only problem here is that it can make it quite easy to dismiss works like Petti’s, because the first glimpse of his paintings does tend to convey the impression of “just” pop art, with little other intrigue or provocation. Luckily, like the trusty art nerd I am (and the not-so-trusty arts editor who also just needed an exhibition asap, oops), I stuck around the gallery and gazed and gazed until I gleaned more than I originally thought my first acquaintance with the paintings would ever yield.

It became clear that Petti’s works deal with a multitude of interplays and juxtapositions: Cultural, social, commercial, artistic/aesthetic, and so on. Not sure what I mean? Just take a look up at that girl right thurr. Traditional Japanese kimono, tick. Traditional Japanese pale make-up and bright lips, check. Traditional Japanese cherry blossoms chilling in the background, check. Plus … traditional bright pink headphones? Not quite so Japanese, I’m guessing. And she’s making that gesture, you know, the one that doesn’t have an official name as far as I can tell, but it’s what drunk people do in mosh pits, implying “rock on” or something musically hardcore like that; whatever it is, again it doesn’t strike me as being distinctly Japanese. All up it’s a pretty whimsical and playful painting that quite comically contrasts conventionally Western ideals of orientalism with modern Western cultural signs and tropes. On a deeper level, what does this really do? Hopefully, it forces the viewer to consider not just racial stereotypes, but ALL stereotypes, and how they manifest and function socioculturally in their own lives.

Murray Eskdale, owner of Mint Gallery where Petti’s paintings are currently being exhibited, agrees with this idea of cultural juxtaposition, commenting that certainly Petti is concerned with “typical” images of Asian culture in these artworks. Not only is it evident in the portrait of the Japanese girl, but in his other paintings too; one depicts a tiger’s face imposed over a background of blood orange bamboo shoots and scarlet red Chinese characters; another portrays a koi fish leaping energetically over what is instantly recognizable as a copy of the famous woodblock print by Japanese artist Hokusai, The Great Wave off Kanagawa.

Not all his works are so culturally charged, however. Alongside Frankenstein the boom box enthusiast is a portrait of what looks like a topless Levis model (with her back conveniently turned from the viewer, sorry boys) sporting some fake Ray Bans and an incredibly detailed and extensive star tattoo, just shy of being located in the prime tramp stamp area. No matter how I tried, though, I couldn’t seem to read anything deep into that one. Seems like some people just enjoy having pictures of hot, half-naked girls hanging on their walls, I guess. Weird, huh? I can’t think of anyone I know who fits that description.
This article first appeared in Issue 12, 2012.
Posted 7:58pm Sunday 20th May 2012 by Beaurey Chan.