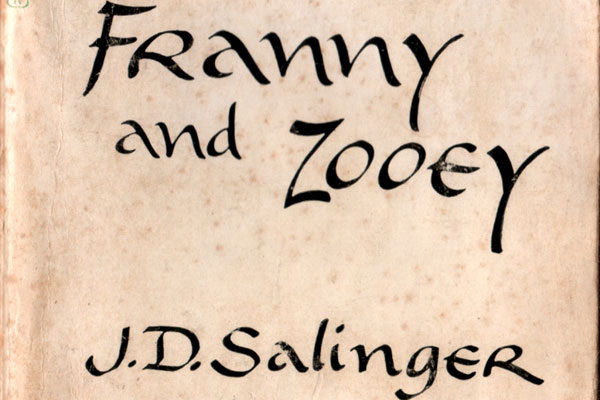 Franny and Zooey is a book about the two youngest siblings of the Glass family. It’s separated into two distinct sections — the first being a short story called Franny, and the second being a novella entitled Zooey.

The first part focuses on Franny and her boyfriend Lane when they meet up on the weekend of the Yale game. Lane takes Franny to lunch, but she soon becomes upset and appears to be having an emotional breakdown of sorts. She tells Lane that she has been reading “The Way of the Pilgrim” (a religious book which follows the narrator’s pilgrimage across Russia while reciting the Jesus Prayer) and is suddenly finding everything around her to be meaningless.

Zooey follows on from Franny and the novella expands on the Glass family dynamic. The story opens with Zooey reading a letter given to him years ago by his brother. The narrative proceeds into an entertaining dialogue between Zooey and his mother Bessie whilst he is in the bathtub. The rest of the book is dialogue between Franny and Zooey regarding her spiritual unrest.

The book reads more like a play than a novel, focusing on dialogue to carry the narrative’s weight. The major themes are set within the framework of four main conversations; the exchanges are set in very close quarters and touch on themes common in Salinger’s writing — religion, existentialism, philosophy. The themes are explored in a very thought-provoking and engaging way, the author showing the reader more than telling. Salinger’s dense use of dialogue examines relationships and family dynamics in a relatable way.

While this kooky book doesn’t take you on any adventures or move at a fast pace, it is very hard to put down. Amongst the cursing and chainsmoking of every character is hilarious material that will have you laughing out loud, particularly in the extensive bath scene where Zooey spends most of his time trying to get his nagging mother to leave him to bath alone (a fair request considering he is 25 years old).

This book (among the rest of Salinger’s work) has somewhat of a cult following. It has been called the college edition of The Catcher in the Rye (whose main protagonist was high school age). For this reason, I would highly recommend it to university students, as it discusses colleges, majors and has characters that are relatable particularly to the uni student age group. It is also short and reads incredibly fast. It’s certainly one that I will consider re-reading.
This article first appeared in Issue 6, 2012.
Posted 7:07pm Sunday 1st April 2012 by Josef Alton.