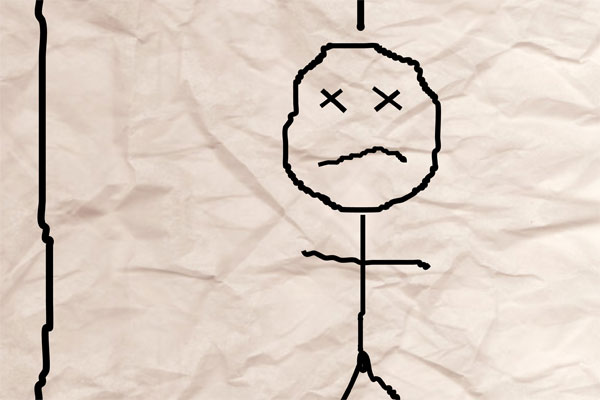 Rosencrantz and Guildenstern Are Dead

“Every time you play hangman a stick figure family loses a father.”

For the final issue before out beloved mid-semester break I believe a change of pace is in order. This week I interviewed the cast of the latest Lunchtime Theatre at Allen Hall and attempted to construct a legible piece of writing from the mayhem.

Rosencrantz and Guildenstern Are Dead, written by Tom Stoppard, is a parody of Hamlet and Waiting for Godot, which even the cast can’t explain. While sitting in the foyer at Allen Hall theatre I ask them to give a brief explanation of what audiences can expect, and we lurch into a debate about what the play truly means and how it could be categorised.

Agnew, the director of the piece, was firm in what the play was not. It’s post-modern theatre … “No, not really.” It’s Theatre of the Absurd … “No, no it’s definitely not.” Then what is it? “I don’t know, it’s just a good play, a good comedy!” The cast can definitely agree on this one, additionally agreeing that there’s “a lot of words”. Even taking on the first act alone was a “monumental task”, which explains the altering from the original plan.

Agnew began the process back in November of last year, working with the full script. After a read through he realised the script was incredibly long, at two hours, and would need to be performed separately on both days of Lunchtime Theatre with an evening performance showcasing the complete work. However, with only seven weeks to rehearse and each cast member having separate commitments it was decided they would shave it down to the first act alone. Agnew has directed a couple of pieces before such as last years 40 Hour Theatre and Frequency, but nothing on this scale. It was probably a wise choice not to take on the full length.

When asked about their favourite part of the process, Sims admitted his was the character of Baz Macdonald, and after a swift moment of silence (as the love was sadly not returned) Agnew quickly declared, “All of it! We’ve got a good, dynamic cast and it’s an awesome play! We’re having lots of fun making great theatre. It’s something people want to see!” Macdonald explained he appreciates Agnew’s “unique directing style.” “Often when you work with your friends it’s hard but with Luke, it’s enjoyable.”

It’s easy to see this cast is smitten with one another, enjoying the long rehearsals and time with one another. The only negative things they could say about the piece was a quick “I get slapped …” from Jacobs.

A cast that is so well bonded is almost guaranteed to make the performance extensively more enjoyable. If you missed them performing at Lunchtime Theatre last week, do not fear; the cast promise they want to, one day, tackle the whole of the play for audiences’ delight. As they say, “It’s a bucket of awesome.”
This article first appeared in Issue 6, 2012.
Posted 7:07pm Sunday 1st April 2012 by Bronwyn Wallace.