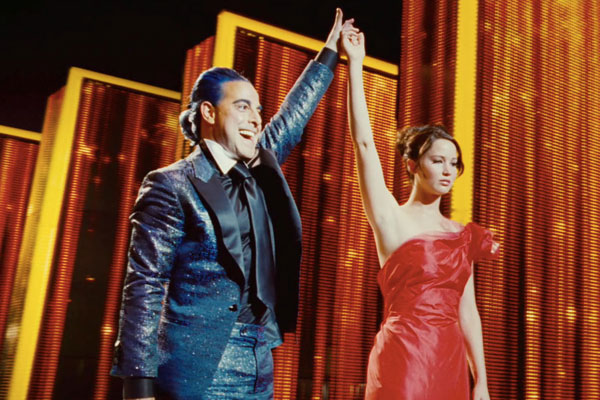 The Hunger Games is the most recent piece of Young Adult lit to roll off the Hollywood production line. In a post-apocalyptic America, the indulgent Capitol rules over twelve districts. Tributes are picked from a lottery of citizens for the Capitol’s instrument of oppression – The Hunger Games. This televised gladiatorial battle is almost like The Bachelor, except the contestants decapitate each other for the rose. And the prize is not dying. The heroine, Katniss, volunteers as tribute in place of her sister. And so begins the spree of killing, love triangles and teenage angst.

The film is almost an exact transplantation of Suzanne Collins’s novel. It puts a magnifying glass to the page, enlarging the scope and capturing the spirit of the book. Director Gary Ross’s lack of meddling with the story is almost disconcerting. Diehard fans may miss the first-person narration, but they won’t be nit-picking changes in the plot.

The performances are precise; Jennifer Lawrence is a strong and terrified Katniss, and Josh Hutcherson as Peeta has sufficiently tousled hair. Capitol decadence fills the screen with pretty colours; a nice break from the dying children. The choppy cinematography captures the panic of the games while the fast pace reflects how compulsive the book is to read.

The Hunger Games is primarily a story of survival and secondly a piece of dystopian-lite. It’s nothing highbrow but the contrast between suffering and vapidity is striking. If you can brave the mass of swooning fangirls the film is well worth your Studylink dollars. But need it be said? Read the book first.