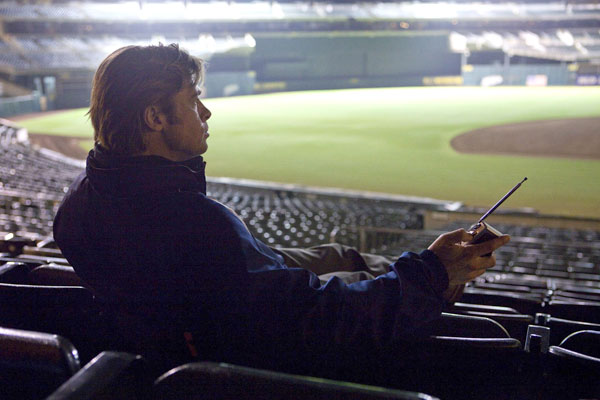 Moneyball is a different type of sports drama. Whether you like sports or not, from Moneyball’s many levels you will gain different insights – a peek into how Major league sports teams function behind closed doors and, at a deeper level, seeing a man’s struggle to fix his past and be forced to embrace change.

Brad Pitt plays Billy Beane, the General Manager for the Oakland As baseball team, a team that has the lowest salary constraints in baseball. Facing a repeat of the last season – losing at the final stage – Beane turns to statistical data to hunt for players that other scouts and teams have turned down. This fundamental change doesn’t go down well with the coach and scouts who disagree with these new tactics. For Beane and Peter (Jonah Hill), the analyst Beane turns to, this challenge prompts the unlikely pairing to form a friendship and battle their way through the baseball season with the world title as their goal.

Both Pitt and Hill work well together onscreen and pull off great performances, earning them well deserved nominations in the best actor and supporting actor categories at this year’s Oscars. The soundtrack to this film also fits perfectly with what Beane goes through in this film.

The film opens with a quote by Yankees star Mickey Mantle which sums up it up perfectly: “It’s unbelievable how much you don’t know about the game you’ve been playing all your life.” If you love sports or American life, then this film will tick all the boxes. Moneyball is worth the trip.