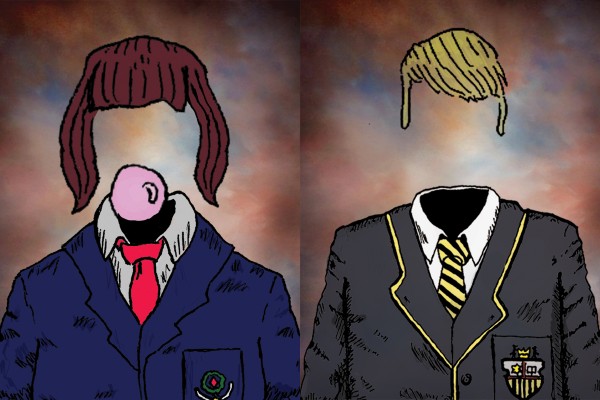 Sex Education: Does single-sex schooling affect us more than we realise?

If you didn’t go to a single-sex school, then you probably know someone who did. Single-sex education is a socially accepted norm here compared to other countries, but over the past 30 years there has been plenty of debate about its efficacy. In Aotearoa, the argument is something like ‘single-sex education is associated with better performance, more opportunity, as well as upholding tradition and heritage.’ On the other side of the coin, co-education is generally associated with fewer opportunities, a lower quality of education and isn’t attached to certain traditions or religions. But how true are these stereotypes, really? Students we spoke to suggested the opposite: that single-sex education is a unnatural environment which affects our interpersonal relationships later in life, while also contributing to the maintenance of class and gender norms.

Tyler* attended a single-sex, state-integrated school from year 7 through to 13. “It wasn’t required of me to attend a single-sex school, and I had options, but I figured for intermediate there was no point doing two years, then switching,” he said. After touring open nights, Tyler and his family settled on his single-sex school as it seemed “good” from the open nights, and appeared to be “better at face value” than other co-ed public schools. “Co-ed is perceived as being full of distractions, if you’re having to balance social and academic intelligence, it’s often easier for parents to go ‘oh I just want my kid to learn instead of being distracted by the opposite sex’,” he explained.

Anna* also attended a state-integrated single-sex school on the basis that her parents wanted her to attend Catholic school, as well as the fact they often referenced research showing that girls “do better” at single-sex schools. “You’ll find a lot of single-sex education or state-integrated schools are tied to a Christian denomination,” she said. But, in hindsight, Anna challenged the value of these traditions. “Single-sex education is a remnant of British colonisation, the transfer of British culture into Aotearoa. There’s also this culture of school pride.” Despite how much society has changed, Anna said that single-sex education is upheld by its association with culture and tradition. “There is a structure in place to make sure there’s a continuation throughout time of getting re-enrolments through family networks,” she explained. “There’s this idea of tradition: my father went to this school, my grandfather went to this school.”

Sophie* also attended a single-sex school for reasons similar to Tyler and Anna: “It was mainly because my mum worked there, but for a lot of girls, the school I went to was the only religious girls school you could attend.” Sophie holds the belief that her experience at a single-sex school deeply affected her interpersonal relationships with boys, and that single-sex education is a breeding ground for toxic masculinity. “Being at an all girls school, any interaction with guys ended up being really hyped up to the point where any boy who came to our school was drooled over.” Sophie’s mum, who was a teacher at a single-sex school, noticed this too. “She said that at her co-ed schools, girls being around boys all day were able to see how gross they really are.”

Single-sex schools separate girls and boys during their formative puberty years. Is high school not when you’re supposed to learn all about the birds and the bees, experience awkward first dates and crushes? The assumption that boys and girls should be kept separate maintains strict gender binaries, operating on the presumption opposing genders should be separated to avoid ‘distraction’. “It’s determined, biologically, our bodies are telling us to mingle, and it stunts social skills,” said Tyler. This logic doesn’t apply to pupils who may be questioning their gender or sexuality, but they have their own problems in single sex schools. “My boys school was heteronormative, I know at least five people who came out of the closet after high school. It’s scary, if you’re someone who’s gender fluid, or questioning your sexuality. You feel like you won’t belong, so it’s hard to buy into those heteronormative ideas.”

“In my experience, all-male high schools are a breeding ground for toxic masculinity,” said Sophie. “I have friends who went to my brother school, and then the co-ed school, who treat their girl mates completely differently. In high school, my friends from the all boys school would invite the girls over on a night on the piss and get drunk enough to feel seedy, whereas I felt more valued as a friend with guys who attended the co-ed school,” she said. “I’m not sure if people realise how they are affected by their single-sex schools. Especially guys, there is such a toxic lad culture that carries onto their university experiences that I don’t think they’re aware of.”

It’s no secret that Aotearoa has a mental health crisis. Growing up in Aotearoa, we’re told to ‘toughen up’ when it comes to our feelings, especially men. Single-sex education could also be a potential contributer to this problem. “You have a bunch of young boys in one place, it’s easy to feed them the message of ‘play sport and toughen the fuck up’,” said Tyler. “That idea of keeping your head down, tall poppy syndrome. So when you leave school, do you have to continue doing that? Single-sex schools turn out mentally harmed boys,” he said. Tyler notes this culture was reinforced by his school, who missed no opportunity to remind the students of their ‘brotherhood’ and privilege. “We had Chapel every Friday, it was nailed into us that we are a privileged few, and it’s you against the world, it sets up ego complexes… They don’t prepare you for the real world. It’s very tribal and territorial.”

Tyler, Anna and Sophie agreed that while single-sex education is normalised, it is potentially harmful to young people and their development, as well as being a reinforcement of colonial tradition, gender binaries and toxic culture surrounding mental health. “I don’t know if I would send my child to a single-sex school, I want them to explore things at their own pace,” said Tyler. On the other hand, Anna said that while she doesn’t regret it, she would be more open to co-education for others. “I don’t regret it, I did appreciate I was able to spend my formative years away from the male gaze, but if I had kids I’d send them to a co-ed school. I look back and think [about] what I missed out on… My perspective, as I’ve gotten older, I’ve come to appreciate high school isn’t about academic achievement, it’s about learning to socialise and be an adult, which comes from a diverse background,” she said. “I agree there should be more co-ed schools. To me, single-sex schools serve to reinforce binaries that are not all inclusive.”