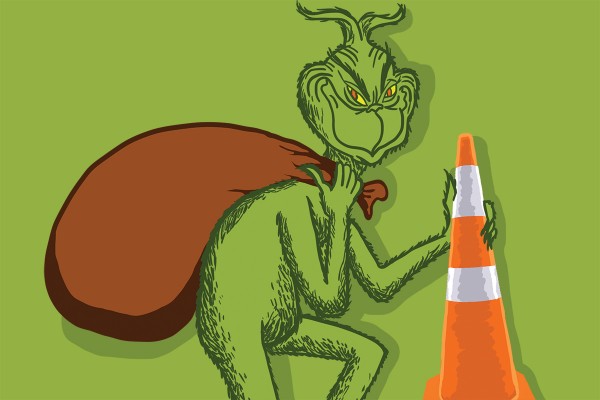 The life cycle of a road cone in New Zealand is similar to our own life cycles. We are born in a place no one has heard of, we spend vast amounts of time sitting in the middle of nowhere doing next to nothing, and from time to time we get filled with alcohol and get absolutely smashed at parties. While Critic does not cone-done stealing in any shape or form, including conical, there is no doubt that the taking of a road cone is a common occurrence on the streets of North Dunedin. It is cheeky. It is senseless, but it is also, for the most part, a victimless crime.

Like almost anything under the sun, road cones can be used as a vessel for alcohol. But they do present many challenges. For example, the hole at the top is girthier than you would expect, and they weigh close to 5kgs which makes for a rapid and often awkward chug. As such, they are often used as a funnel for aesthetic and ironic reasons more than anything like convenience. Plus, they’re filthy.

Fucking with the city dwellers

Another common use for road cones is simply to get up to some good-old-fashioned mischief, by placing them somewhere they are not supposed to be. When there was roadworks opposite Buddha Stix, some legend managed to get a road cone onto the head of the Buddha on the roof. The result was a cheeky and hopefully harmless bit of fun. Road cones can really be placed anywhere, after all, this is what they’re designed for. Plus, the higher you can place them, the more anonymous prestige you will receive from all the people that look up and wonder “How on earth did that get there?” See: The Cone Bandit from a few years ago.

Drinking games are also possible if a road cone is procured. One simple yet fun possibility is called “Cone Zone”, in which you and your friends take turns flipping a cone so that it lands on its base. It’s pretty easy, so the first person to not land the cone has to take a number of sips equal to the streak of throws that were landed before they missed. The person who missed then starts the next round, and if they miss three times in a row they finish their drink and are eliminated.

No doubt this is at the extreme end of cone antics, but in some dingy and unexplored corners of Dunedin there have been reports of cone fights taking place. The origins of the practice are unclear, but some details are known. Each participant must acquire three cones, one for each arm and one for the head. From there you must attempt to push your opponents across the line from whence the cones were taken. Victory.

Due to the aforementioned association with road cone theft and alcohol, one often finds oneself in a situation where there is a road cone on hand and your friends are suffering from a case of alcohol-induced selective hearing. Using a cone as a megaphone presents the perfect opportunity to amplify your voice to levels so loud that it is impossible for them to ignore you.

Sometimes after a cone has been sitting in a flat for a while, you find yourself attached to it. The cone becomes more like a member of your flat than a piece of road safety equipment. If you draw a smiley face on it you can even pretend it's your friend. As time progresses, the body of human knowledge on the uses of road cones will grow even further.