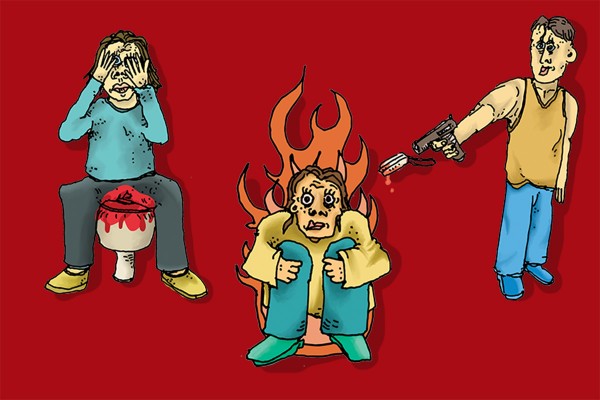 Getting your period is a major milestone during puberty. After years of sex ed talks and seeing your friends and family get it, finally having your period can be scary, exciting and also just straight up gross. Here are a few of the weird, wonderful, messy and icky parts of periods, as told by some of our readers.

Miscarriage Mishap
So, I was at my holiday home, having a movie night. We decided to watch the Time Traveller's Wife. I was 14 at this point so it was age appropriate. (Spoilers!) In the movie, the main character has a miscarriage and there’s a lot of blood. These images are now ingrained in my brain. The movie finishes and I go to bed. Next thing I knew, I was up early in the morning with blood in my undies.

My first thought, based on the movie, was that I hadhad a miscarriage, despite the critical factor that I was, in fact, a 14-year-old virgin. I freaked out, images flashing back to me from the movie. I spent the next twenty minutes in the bathroom crying because I had lost my child. Mother Mary would sympathise with me at this point as we were now sisters in immaculate conception. I finally yelled out to my mum that I needed her. I told her I was bleeding, and she promptly said “oh, I’ll find you a pad”. It clicked. I was not having a miscarriage, because, well, that was impossible. I had just gotten my first period and now had to face the shame of being on holiday, being 14 and having to use my mum's pads for the next three days while I mourned my non-existent child that I had held for a whole twenty minutes in my brain.

Fire Burning
So I have a lot of weird allergies, and one of them is to semen. God hates me, apparently. Sometimes I’m completely fine, but a lot of factors influence the severity of the reaction and whether or not it feels like being fingerbanged by Edward Scissorhands. One of these factors is my cycle. Having sex with my ex was fine 75% of the time, but in the days leading up to my period I’d spontaneously start being allergic to cum. Oh, and my cycle’s unpredictable too. We’d be cuddling in post-orgasmic bliss, exhausted and content, when suddenly my vagina would start burning with a fiery ache that’d make me keel over. “Guess my period’s coming.”

Finger Paint
My ex and I used to have sex when one or both of us were on our periods. It wasn’t a huge deal, generally you’d just leave your mooncup in and make sure you do your laundry. One time though, I was topping her while she was on her period, and leaned an exhausted hand against the wall. It left a bloody handprint above her bed, which we laughed about. Like, it was a perfect red silhouette. After we broke up, a friend told me months later that she kept the period blood handprint as a sort of trophy and never cleaned it off. MONTHS. Wtf.

Head Down, Pussy Up
Not everyone can deal with tampons, and on this day, I certainly couldn’t. Picture this. I’m in the bathroom at home, trying to stick that sucker up there. I was still relatively new to the whole period thing, and it’s a lot learning how to get a tampon up there without being scared of it getting stuck. Anyway, my anxiety got the better of me, and I ended up passing out. My mother then found me, passed out on the bathroom floor, pussy up and tampon out.