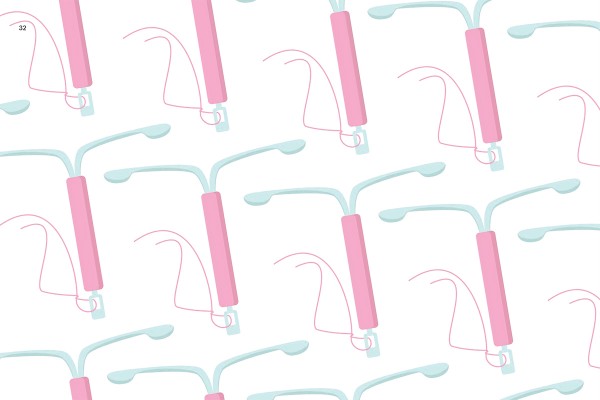 While you’re here, google IUD moth (Plume Moth if you want to get technical)

An IUD, or Intrauterine Device, is a physical contraceptive that sits inside the uterus – not to be confused with IEDs, which are bombs. They can be either hormonal (going by names such as Mirena or Skyla) or non-hormonal (going by the creative name Copper, which is what it is made out of). IUDs last longer than most Dunedin relationships, with the Mirena lasting five years and the copper one lasting ten. But people with uteruses who get these contraceptive devices can have wildly different experiences. From gaining heavier flows, to more cramps, and even losing their periods altogether, it’s a mixed bag of lollies – if those lollies were pain, blood, and hormones encased in soft lil’ plastic wrappers.

Everyone has different reasons for getting the latest contraceptive revelation anchored inside them. Some just hate babies, others want to minimise period pain. Molly, a Dunners local, was on the pill (AVA 20) from age 16 to 23 and said that she didn’t recognize herself while she was on it. “I couldn't differentiate between reality with valid emotions, and what I now recognize as hormonally-induced emotions,” she said.  The only side effects of birth control that were mentioned to Molly were weight gain and mood swings. But instead, it “triggered severe depression and anxiety and that was never explained to me. It’s almost like that’s just to be expected and they don’t think it’s worth letting you know.” When Molly looks back now, she “can’t believe that I was a 16-year-old, not emotionally mature in any way, and barely starting puberty, when they prescribed that to me. It was the worst thing that could’ve happened for my mental health.”

If you opt for the IUD over the pill, getting the baby-blocker firewall inserted is not a comfortable process. One recent graduate, Fawn, said it was “the most pain I’ve ever been in – but it was very temporary.” Another student, Violet, compared the pain of inserting an IUD to when she accidentally overdosed on dairy. She said that after not having any dairy for about eight months, she accidentally drank what she described as “a fuckton” of cow’s milk, which caused her to double over with an insane, unbearable pain. “This deeply internal pain was the exact same cramping pain as getting an IUD inserted, so when I got mine a month after the cow-milk incident, it wasn’t too bad.” Even after the great pain of the insertion process, Violet reckoned “a child would hurt a hell of a lot more.” But even if it’s worth it, getting an IUD is still “truly an invasive procedure, it can take a mental toll on you,” according to Molly.

The pains can extend beyond insertion, even if they’re worth the protection. Penny is someone who did not have a great experience with the Mirena. It was smooth sailing for the first year while she was single, but six months into seeing her current partner, she was first diagnosed with bacterial vaginosis [BV]. It led to a vicious cycle of BV and yeast infections that lasted around a year. Penny was prescribed antibiotics off and on for the year, and described it as “the doctors giving me a round of antibiotics so I can't drink and have no social life. After the antibiotic course was done I would get a yeast infection.” It left her questioning her relationship with yeast infections, and she found herself asking “Do I spend $20 or suck it up?” She opted for dealing with it quite a few times. None of the multiple doctors she saw attributed this to Mirena.

“I went back to the doctor who put it in. She prescribed me heavier antibiotics but I couldn't go through four days of it because of the yeast infections.” Over this past summer she got her IUD removed and hasn’t had BV once. Penny reflected, and said that it “was a bitch of a year trying to sort it out, thinking it's yourself or something you’ve done wrong,” when the solution was as simple as getting it removed. During the removal process, she said “the nurses were incredibly kind and helpful.”

Molly and Fawn had almost polar opposite experiences with their IUDs. Fawn was spotting for a month with mood swings for the first two weeks, but almost a year later, she “feels very normal and I hardly get cramps anymore, when I used to not be able to go to work because of paralysing period pains”. This is apparently a common response to Mirena. Additionally, around 20% of women stop having their period all together, which is what happened to Violet.

Molly, who got the copper IUD after having a hellish experience with high dose hormonal birth control, said “It changed my life for the better, I’m a different person now.” She reckons her periods have been “heavier with more cramping”, which is common with the copper IUD.  Molly understands why people want the Mirena: no periods makes things a lot easier, but the lack of hormones in her body “feels more natural, as the moodiness of the hormone cycle feels less cloudy”.

This is not Critic WebMD. If you think an IUD would be right or wrong for you after reading these accounts, consult a professional. And no, your mate who’s halfway through medical school doesn’t count. However, no matter what you do, please for the love of all things, do not follow that ghastly TikTok trend where people were DIYing their IUD removal from the (dis)comfort of their own homes. That can only end awfully.