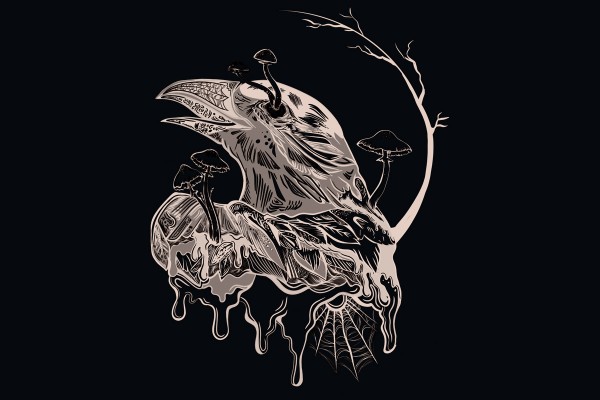 SCIENTIST SPEAKS OUT: Invisible Birds with IBS are REAL

Critic gets weird messages. Some of our readers have amazing tips and info we love to hear, and some of our readers are clearly coming down from a bad trip. One of the latter was someone who called themselves “J”.

J was taking a walk of shame Sunday morning, with every crunch of glass making their headache that much more unbearable. To make matters worse, J was bombarded by the sensation of falling bird bombs the entire achy walk home, yet there was no shit to be seen, and no winged assailants to speak of. So – as everyone should when they experience something weird as hell – J messaged Critic to report on the baffling phenomena of ghost bird poos.

After the office was done pissing themselves, a little more thought was given. Ghost birds, of course, are absolutely ridiculous. But what if these birds weren't ghosts, what if they were simply… invisible? It would explain why no one has ever seen them, and if these birds were invisible, then it would only make sense that their shit would be invisible as well. Maybe J wasn’t so crazy after all. Journalistic integrity, mild curiosity and upcoming assignment induced procrastination warranted a further look into these ghost birds.

Critic had a chat with Professor Yolanda van Heezik in the Zoology Department, who is currently working on several bird-related projects. She was asked the ultimate question: Are there invisible birds pooping on the brave breathas of North Dunedin? What are the chances? “Very small,” she said, “as most bird poop is visible.” What we’re hearing is that it’s not impossible, that there could be invisible birds. “Yes, I can’t say there definitely couldn’t be,” she said, though she didn’t seem entirely stoked.

Although not ready to come forth publicly admitting to invisible birds, T* put forth this fascinating theory. “My cousin has IBS, and she goes to the bathroom a lot. Maybe these invisible birds have IBS.” T is studying with aspirations of teaching your children, just so you know. The science isn’t conclusive on the presence of invisible, chronically shitting birds. But with all the totally-credible eyewitness testimony coming forward from J’s friends, who confirmed that they too, on a Sunday morning after a night out, feel like birds are shitting on them, the theory was growing legs, or perhaps wings. And with Yolanda’s expert and not-at-all-misconstrued testimony, those legs were beginning to take steps.

But, much like when you described how much you drink to your parents during mid-sem, this theory isn’t totally honest. When J came forward with their story, it seemed the perfect lens to investigate the scientific principle of uncertainty: that nothing is ever 100% certifiably true, and how this lack of certainty factors into the creation of various conspiracy theories and their ‘evidence.’ Scientists worth their salt will acknowledge that the only true certainty in science is uncertainty, but for the general public who haven’t spent 20k on a BSci, this way of doing things can be more than a little mindfuck-y, complete with a constant nagging of “What do you mean you aren’t 100% certain?”

Preying on that confusion and uncertainty is how conspiracists manipulate evidence and science to push agendas, most notably the climate change deniers. If science isn’t 100% on climate change, that last 0.01% means that even the most outlandish of conspiracies can claim some ounce of legitimacy.

Uncertain doesn’t mean untrustworthy. Uncertainty is about allowing scientists to explore the probabilities and likelihoods of different outcomes, and express nuances. Groups like climate change deniers will often imply that this uncertainty is the same as doubt and the unknown – which just simply isn’t the case, no matter what your bogan uncle says at Christmas.

Yolanda did say that the chances of invisible birds being real were very small (in alignment with scientific uncertainty), but she immediately followed that up with the explanation that it was incredibly unlikely, and asked “What was I being asked again?” And although Yolanda hadn’t had any experiences with being misquoted (until now), she had run into issues with field information being taken out of context. “There tends to be focus on stuff that appeals to the public, so our aim is always to focus the conversation to something more meaningful.”

Although the invisible bird pitch was incredibly convincing, especially with our twisted expert testimony and dubious eyewitness accounts, it wasn’t enough to win the favour of some of our more studious readers. Oliver Jutel, a media and communications studies professor, tried to shed a little light on scientific uncertainty and how it gets used in conspiracies.

“[A lot of us] don’t understand science very well, and science approaches invoke black and white terms and thinking. Take New Zealand’s Covid response. The public health message was vital, and the experts were able to eradicate uncertainty speaking from an altar of science. But science changes, especially with something so new and unknown as Covid. So when recommendations about isolation times and masks shift, people go to town on that. Science can be invoked and used in different crowds to great effect.”

The 0.01% chance that invisible birds are pooping on Dunedin walk-of-shamers is the same 0.01% chance that climate change isn’t real, or that 5G is part of the New World Order. Because science refuses to deal in absolutes, fringe conspiracists can cling to that last shred of uncertainty and use it to back up their nonsense claims. It’s a scrap of legitimacy so thin that you could floss with it, but it’s enough to give these groups credibility amongst the credulous, even if their claims are about as likely as Dunedin playing host to a population of bowel-irritated, invisible birds.