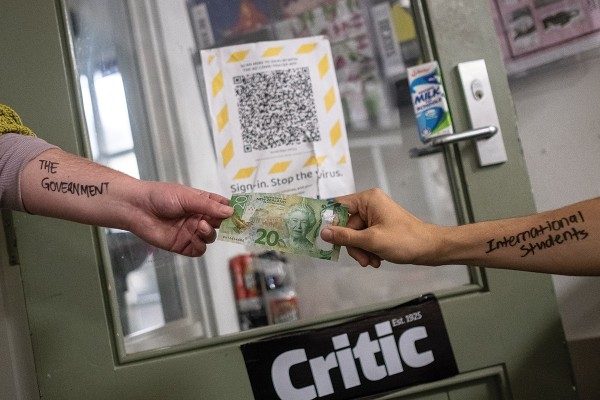 1000 international students are coming to New Zealand this year, but they’re facing rising costs before they even enter the country.

When the government announced the decision to allow these students in, it was all about the numbers. “The annual economic value of this group of 1000 degree-level international students is estimated to be roughly $49 million in wider economic contribution, including approximately $27 million in tuition fees,” read the press release from Minister Chris Hipkins. That sentence is absolutely cartoon-villainesque in its focus on the dollar signs rather than the people.

The message is clear: we don’t want the students, we want their money.

At the same time, the Minister announced that the students would need to bring $20,000 of living costs into the country. Previously, international students only needed $15,000.

These living costs are not linked to the cost of living as a student in New Zealand. Studylink provides living costs of about $12,500 to domestic students, for living in the same cities as international students for the same amount of time.

It is not easy to be selected in the group of 1000 students. They’re all students who have previously studied in New Zealand, and those who are closest to finishing their degrees will get priority. Like returning New Zealanders, these students are coming back to cities they have already lived in.

But instead of supporting these select few students to come back to their universities, the government has increased the cost of MIQ by over $2000. The increase that applies to all temporary visa holders, but in reality international students and skilled workers are the majority of people affected by the rule.

There’s a common misconception that this is okay and doesn’t really matter because international students are rich. That’s not true. The vast majority of students who come to New Zealand are not coming here because they have piles of money at home. They’re coming here to get a qualification that can earn them money in the future. They’re often supported by mortgages or loans taken out by their parents.

Sure, we have to prioritise who comes into New Zealand. MIQ is overloaded. A limit on the number of international students made sense. But, to use the wording of the press release, these are “students who have made the greatest commitment to New Zealand”. After requiring large amounts of money, qualifications, and commitment from them, increasing the cost of MIQ a month before they arrive seems like a slap in the face.