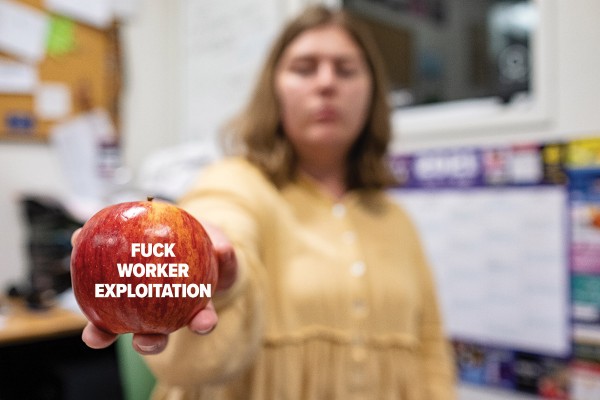 Orchards called on uni students to make money picking and packing. Students were not prepared for the exploitative working environment they walked into.

When students set off for the orchards of Central Otago and beyond, it had been a rough year already. A lot of businesses limited the number of summer interns they would accept, so many people’s summer plans fell through. Seasonal work filled the gap, and the orchards were apparently desperate for workers. There were government campaigns encouraging orchard work and there was even free money on offer if you could ‘tough it out’ for the summer.

What students didn’t anticipate was just how tough it was going to be. Apparently, ‘tough it out’ sometimes meant ‘endure illegal and dangerous working conditions’. Annabelle Vaughan’s feature in this issue, “The Fruits of Our Labour”, takes a hard look at how the promise of a summer outside in the sun was true for some and deeply misleading for others.

One student who spoke to Critic was recruited as a year 13, while she was attending a Dunedin high school. A government agency came in and gave a presentation to the students, recommending specific employers. The student and her friends took recommendation and went to work for a large cherry packhouse.

What they experienced was a bit like a Dickens novel. They arrived on the first day and were moved into a packhouse, which was freezing. Because it was the middle of summer in Central Otago, they hadn’t prepared for the cold. They stayed in accommodation provided by their employers, surrounded by workers who had been in the packhouse for weeks. Some of the other workers were so sick, and coughed so much, that everyone found it hard to sleep at night.

In their first week, these students worked such long hours in the packhouse that they could not buy food, because the supermarkets would open and close while they were at work. This was meant to be their idyllic kiwi summer in-between high school and uni, where they could make money, get a tan, and prepare for the year ahead. Instead they faced exploitation and illness. The student who told Critic about this experience got shingles after the first week of working in the packhouse.

That was the most shocking story. But more mundane forms of exploitation were more common. Four staff members of Critic worked in orchards and they all agree it was a “shit time.” Rather than illness and cold they faced employment law breaches and abuse. Managers tried to pay them for the quantity of their picking rather than the hours they worked, abruptly changed the amount of money they could earn per tree, and called one employee a “fucking bitch.”

The worst thing about these stories is that they’re not new. Migrant workers have been facing these conditions for years and nothing has changed. I doubt anything will. Boomers will think “university students these days are just being soft,” and go back to their lives where they never have to work 14 hour days in a freezing packhouse, or think about the people who do. Now that employers have kicked up enough of a fuss to bring in workers in from overseas, who mostly won’t complain about the conditions they’re working in, people will ignore this problem again.

If you have any stories to tell about your summer job, hit me up at critic@critic.co.nz.