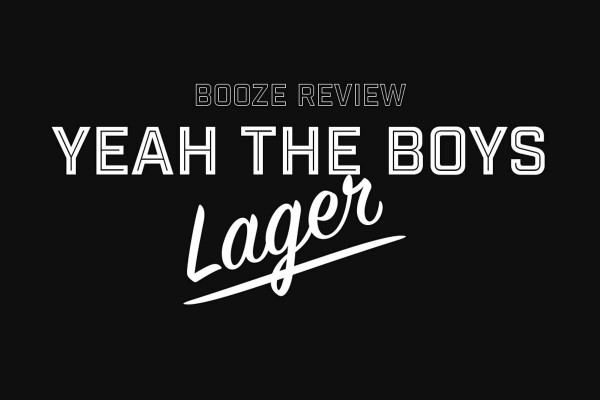 I consumed Yeah The Boys lager on a Wednesday evening over a chill game of cards that quickly escalated into an intense game of bullshit. The beer itself is alright, but it’s a bit pricey and nothing to rave about.

The marketing of the drink is a different matter. The packaging contains a strange mix of American baseball font and slightly outdated references to Kiwi culture, like it’s an American exchange student trying to assimilate or a politician trying to relate to the youth. The description on the can with phrases like “dogging the boys at home with your middy,” brings the same feeling that I get when one of my parents picks up on some slang word or phrase and begins to adopt it. I immediately make a mental note never to use that word again to avoid the association with the older generation. The packaging seems classy, but once you give it a read it’s off-putting, like the Otago Daily Times.

The YTB smells like pretty much any lager, no hops are noticeable. In a glass it is light but cloudy. The head is pretty shit and disappears after a minute or two. The taste is unremarkable. Even after my enlightening Baltika-9 experience last week, I couldn’t taste anything unique. It was slightly sour, but apart from that YTB lager tastes like any other lager.

The mouthfeel is good, it is light and clean. The skullability is very high due to the low fizziness. Even after being heavily targeted in bullshit, I found that skulling was never too difficult and the bloat was minimal. YTB lager is easier to sink than a Health Sci’s dreams.

Overall, YTB tasted fine. It’s essentially like a slightly sour DoBro. It is easy to drink and easy to drink a lot of. YTB lager comes in a 12 box of 5% 330mL cans. I bought my box on special from SuperLiquor for a steep $25. However, in my research I did see an online advertisement for an $18 box at Pak’nSave. If this is true that is not a bad deal for beer at ~1.15 $/standard. However, at the $25 price I paid YTB lager is not worth your money, especially considering the added cringe factor.

While some may find the packaging of drinks like Wakachangi slightly over the top, at least the Wakachangi packaging just revolves around Leigh Hart’s shit-talking. The packaging of YTB seems like it's produced by a middle-aged marketing team in an attempt to create a drink that appeals to young people. Well-loved drinks like the Flame, Billy Mavs and Part Time Rangers are popular not because their packaging panders to drinking culture, but instead because drinking culture has adopted them as iconic drinks. This adoption is not forced but happens naturally through a process of trial and error. YTB lager tries too hard to convince people it is an iconic drink, and for that very reason it just isn’t. Truly great drinks speak for themselves and YTB lager is not one of them.

Tasting notes: Goes down easy, like you’ve drunk it before.