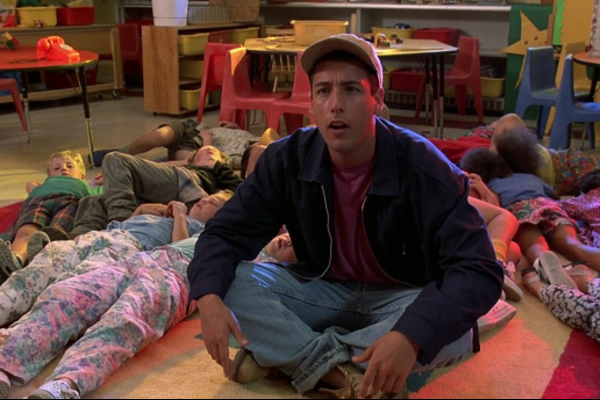 Before starting this week’s review, I would like to take this time to declare that I am officially sick. Now I’m not blaming anyone in particular, but I think Rob Schneider is involved somehow (I feel like he’s the kinda dude that wouldn’t sneeze into his elbow). I am currently high on painkillers and a bit delirious, so bear with me if this starts to go off track. I need some comfort in this time of self-pity, and plus Elliot really wanted to watch this film. So let’s strap on in for some Billy Madison.

Like most Sandler films I review, I actually hadn’t seen this one. I suppose it makes it more fun, but also kinda ruins it for me as I feel too cynical to fit the target demographic. Billy Madison is a film about this 27-year-old kid who can inherent his father’s rich hotel business but there’s only one catch, he’s never completed school! Who would’ve thought that money can’t buy you knowledge! So, the whole premise of the film is that if Billy can complete heaps of grades of school in two weeks, he’ll get his father’s business. Now I’ve got a few thoughts on this film.

Firstly, Sandler would’ve been about 29 when making this film. If you just mute it and don’t listen to him talk, he actually looks kinda fit? Maybe it’s my delirious brain, but he looks like a bit of a daddy in this one. However, his character’s crude comments and basic plotline tend to ruin the illusion. Like it’s a heartwarming story about learning and respect and yadda yadda yadda but it’s also a bit predictable. Billy learns a lot of stuff, he falls in love with a teacher, passes the grades, etc. It does have some nice moments where Billy fakes peeing his pants for solidarity with his lil buddy, and I actually felt an emotion then.

I feel like the film has deeper political messages than you might think. Billy comes from a wealthy family; everything is handed to him on a silver platter. He never has to work, since his rich father can pay his way out of any situation. He never had to go to school because of his wealth, leading him to have a lack of common sense and a poor understanding of how the world works. The only reason he goes back to school is to inherit his father’s business.

Just think about that narrative: a grown adult who knows very little about the world and only cares about money, gaining large amounts of inheritance from a rich father to run a hotel empire without any business experience? Who does this remind you of?

I’m going back to bed.