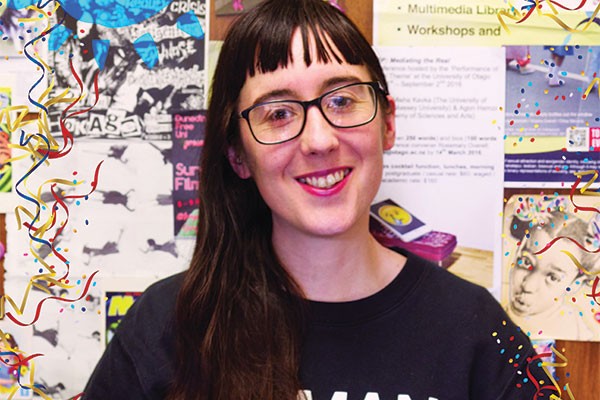 When Rosie was hired she was the youngest ongoing academic staff member at the university. She was 29. Now 32, Rosie says she was “Just lucky. I went from finishing my PhD to getting the job.” She moved from Melbourne where she studied to Dunedin three years ago.

The job was much more full on than Rosie thought it would be, but it is her dream job. “It’s the job I wanted since I was in high school. She says her academic friends in Melbourne fantasise of someday getting a job at Melbourne Uni, “but it will be when they’re 50 and some old person dies. They’re happy to sit there and work as casuals for years and years and years. But the problem with that is you never make much money, you get caught in a cycle of being laid off half the year, and you can become quite embittered by that. It’s a fairly myopic way of seeing academia, if you stay at one institution that you studied at, do your PhD there and then work as a casual.”

Rosie’s PhD was on the Grindcore music scene in Osaka and Melbourne. “We had this raft of Japanese bands coming over to Australia to play”. There were cheap flights between Melbourne and Osaka and she wanted to unpack why there were two off-centre cities with these metal scenes.

She was also interested in where women stood in the scenes. As a fan who loved being in the mosh pit, dancing, and socialising at gigs, Rosie explored how that was at odds with the representations in the scene. “The bands’ lyrics were often about rape or misogyny, and they often had brutal or violent, pornographic images on the drum kit or projected in the pub where they were playing.” The bands had names like “Vaginal Carnage” or songs called “Raped with a Chainsaw”. Rosie found these things offensive but still enjoyed the music. “I was trying to think about that tension and how that contradiction works, whether there’s a disparity, cos there’s always this thinking “oh he’s not really like that, they’re just performing it.” But what’s the complicity there? What’s the politics around it? What’s my complicity? Am I being complicit with misogyny by dancing?”

Rosie’s PhD was in Cultural Studies, a subject we don’t have at Otago Uni. She says the MFCO department here has a strong Cultural Studies bent. “We’re bringing a kind of broadly Marxist reading of media studies in terms of ideology and power.”

Rosie teaches a paper called “Digital Asia” and the “Writing for the Media” paper where she can use her Cultural studies expertise. “We try to foster in the students a criticality around the idea of objectivity. The journalist isn’t an amazing being who can be objective. No one is. You can never reach that point of being objective. So we get to critically reflect on their subject position when approaching a story ethically, particularly for their feature article. We hope they’ll then produce something that’s critically informed but also well written and engaged.”

New Zealand and Australian culture are more different than Rosie thought they would be, but similar enough that the deviations seem “uncanny, slightly off.” Aberrations such as “Queuing. People here don’t seem to queue they just kind of mill around the coffee shop counter. They don’t move aside. Everything is slower. Chit chat.” She finds Otago Uni old fashioned. “When I moved here they were just bringing in eVision and everyone had their hands up going “Oh what are we going to do without sitting in the link for four days talking to every single student?” And I’m like “Good morning? We’ve got computers!” She says Dunedin people are in denial of how bad the weather is. “I’ll go “The fucking wind it does my head in,” and someone will go “Oh it’s much windier in Wellington,” and I’m like “I couldn’t give a fuck about Wellington.” It’s colder in the North Pole, but I’m not in the North Pole, I’m here.”

Critic's column offers a few discussion points for when trying to blow smoke up your lecturer’s ass.
Got a lecturer you want to know about, write us at: critic@critic.co.nz