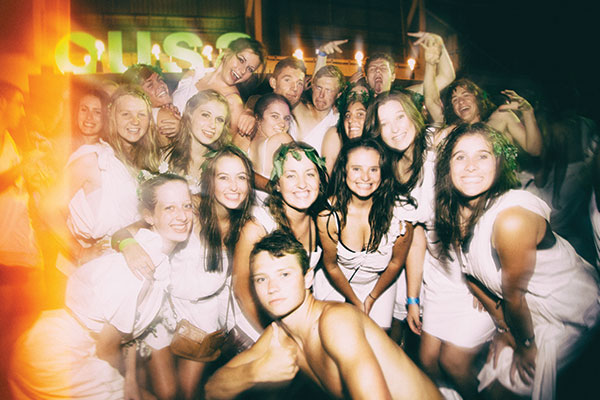 Bouncing off the halls | Issue 1

Freshers — don’t despair. Those of us who were fresh meat in the days of the Cook, the Monkey Bar and $4 Jagerbombs at Melbas look to you now to carry on the torch of the tales. If your nauseating O-week activities are anything to go by, you’ll do fantastically.

UniCol, the monstrous presence towering over campus, packs a punch with its O-week shenanigans. One gentleman climbed from the annex to the seventh floor to paint the walls in vomit as he attempted to find his bedroom. Upon being discovered on all fours with his pants around his ankles, the yakking young’un was escorted back to his room in a wheelchair, with plenty of time to think about the kind of first impressions he was making. Ah, bless.

Hayward College also made a valuable contribution to the fresher O-week barf quota, with stories of projectile vomit covering walls, doors and carpet, spanning a rather impressive 15 metres in length. The culprit remains unknown, although evidence seems to point to a fresher incarnation of The Exorcist.

Scumby Cumby’s new batch of freshly risen fornicators has more than earned its name. Two lads took it upon themselves to infiltrate the infamous girls-only floor, where they were discovered snooping through one unfortunate lass’s lacy undergarments. Caught with their hands in the cookie-jar, the lads fled the scene, no doubt blaming it on the a-a-a-a-alcohol.

In one week, the freshers of 2015 have committed some disgusting, depraved and downright ugly deeds.

Keep the stories coming, guys. We never reveal our sources and these reports come from our nifty moles inside the halls. If you’ve got a tale worth telling, email critic@critic.co.nz.
This article first appeared in Issue 1, 2015.
Posted 4:35pm Sunday 22nd February 2015 by Staff Reporter.