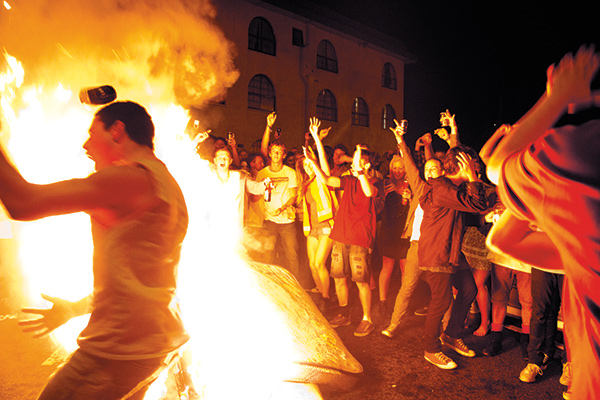 Bouncing off the halls | Chronicles of Castle

Thoughtful students look out for the kids

Due to the great success and controversy of last week’s Bouncing Off the Halls, Critic is back with more stories of booze, boobs and bodily fluids.

This time we’re moving away from the stomping grounds of Dunedin’s filthiest freshers to the drunk, disorderly, disgusting and depraved pastures of Castle Street, the infamous student ghetto to which many call home.

Be warned – she’s not pretty.

To start with a bang, we must begin with the tale of one dirty Castle damsel who was lucky in love at the end of a night out. The horny maiden dragged her prince back to her flat, where he was struck with sudden hunger pains that needed urgent and immediate attention. No matter that they were in the lounge, the ravenous lad went a-snacking on his lady-friend. Unfortunately this midnight feast was to the shock and horror of her flatmates who entered the lounge only minutes later to see their friend in a rather compromising position. An escape was needed for our young male hero who quickly dialled the number of his sober driver. Unfortunately the love story was not to be. The girl was shocked to discover his sober driver was his mum and that he was still in high school. Cheers, Dunedin, for doing your part to solve the world hunger crisis, starting with those who need it most – the children.

Earlier this year, one Castle student-cum-groupie showed Tinie Tempah some Southern hospitality, shedding and bedding the English rapper during his visit to Dunedin. For the sake of our own, Critic sincerely hopes Tempah was packing a tad more than his name suggests.

Castle Street was recently treated to the Gay Box’s annual party, which boasted over $3,000 worth of alcohol for the lucky guests and saw both walls and brain cells demolished in one ridiculous night. One intoxicated student must have mistaken a cracked wall for a bathroom as, according to the terrified onlooker, “he whipped out his cock and peed in the hole!” All other students in attendance report complete and total memory loss.

Christchurch students, who have frequently come down for the sole purpose of destroying North Dunedin, have faced a swift vengeance. Dunners lads recently visited the Garden City, ransacking and ravaging Christchurch in a way that would make a mother proud. Critic has even heard reports of one student defecating inside a pair of shoes.

To end on a high, three female students were caught smoking an unidentified illegal substance outside the Marsh Study Centre early last week. They avoided charges by claiming they were participating in a psychological study on the effects of drug use on study habits. When this didn’t work, they performed a cheeky flash and fled. Top marks, Castle Street. Top marks.