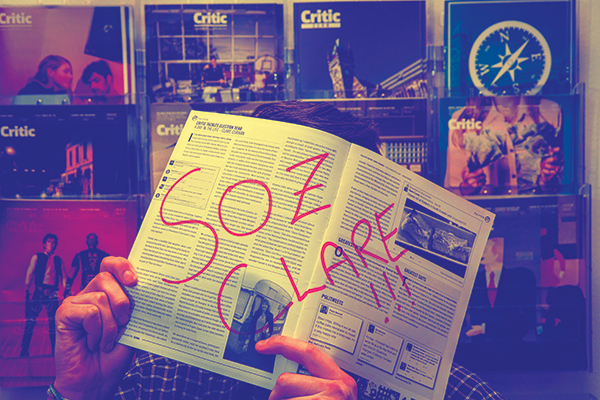 Let’s be fair – as the editor of a student publication, I naturally love a bit of scandal. I’ve chased trouble by publishing my opinions since early high school. It will be no surprise, then, that I was initially having the time of my life last week when Critic Politics Editor Carys Goodwin’s profile of Dunedin South MP Clare Curran (issue 14) was the source for the third-to-top link on the front page of Stuff.

Initially titled “Clare Curran breaks sledge pledge,” however, the article was a completely twisted and poorly researched sledge in itself. The context is that last Sunday 6 July, Labour “leader” David Cunliffe announced a pledge that Labour would run a positive election campaign that doesn’t include “smear campaigns and a personality cult,” implying that the usual personal attacks seen in politics should, in theory, be out the door. Critic’s profile of Curran includes her letting loose on such shining personalities as John Key, Chris Finlayson and Jami-Lee Ross.

The scandal almost sounds justified at this point, right?

The problem lies in the fact that Curran’s profile in Critic was published online at about the same time as Cunliffe’s announcement. It is thus not too difficult to deduce that the interview with Curran was carried out before the announcement. In fact, as the original Critic article states, the interview took place after Curran’s appearance on Vote Chat. That was 23 May.

The irony is even more painful when you take in to account that this article was written by Andrea Vance, who won the award for Reporter of the Year back in May for her work in uncovering the GCSB scandal. People are very quick to criticise New Zealand media - the fact that this was the practice of our country’s best reporter is perhaps the most succinct justification of such criticism you are likely to see. Indeed, on the day the story broke, her article was significantly altered every time Critic checked back in with Stuff. I wish we had taken screenshots. As Critic goes to print this week, there is now a footer that reads “The original headline on this article gave the incorrect impression that Curran made the comments about her political rivals after Cunliffe’s ‘sledge pledge’ was made.” No shit.

The political bloggers (page 16) predictably misbehaved, too. Initially jumping on the band-wagon without second thought, Kiwiblog’s post was titled “That didn’t last long,” with Whale Oil’s a much longer “So much for the ‘Sledge Pledge,’ Clare Curran carries on with the Nasty Party plan.” Critic attempted to correct them; Kiwiblog at least posted an update with a no-evidence-based historical twist, however, Whale Oil’s angle was as out of right-field as you’d expect – when Curran’s sister used the time of the interview to defend her, he tweeted “is this how Labour MPs get around the sledge pledge, get their sisters to attack the media?”

Naturally, Curran’s not perfect here either. After initially tweeting that she “enjoyed meeting” Carys, predicting that she has “a big future ahead,” Curran was only thankful when the article was first published. However, if you believe her responses as published on Stuff, then Carys was “pushing her” and the legitimacy of this publication was brought in to question because “it was a university magazine.”

I’m going to hold back from launching into a hotheaded defence of Critic here because Curran’s responses are somewhat understandable considering the blatant attacking nature of the Stuff article. I’d say she panicked – all that was necessary was a statement of when the interview occurred and a promise to toe the new party line. She is perhaps only guilty of skipping out on her media training sessions while searching for the perfect cheese roll.