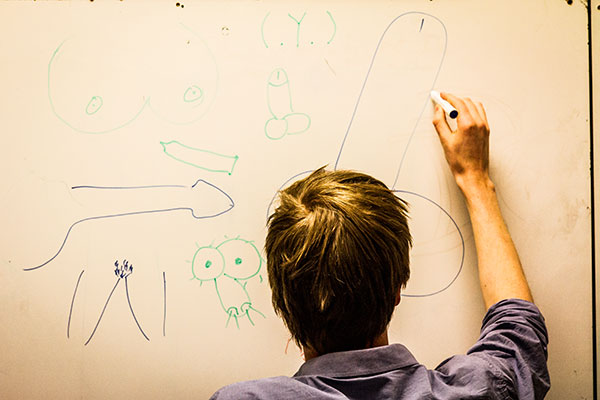 Religion in general, and Catholicism in particular, has rarely had anything useful to say on the subject of vaginas. Now, I’m no expert on the topic. For the most part, I know what to do with one (heyyy), but I’d still classify myself more as an “amateur enthusiast” than as a full-blown pro. But new lows are reached whenever a (male, ageing) Catholic puts in his two cents’ worth on the subject.

There has been little equivalent compunction as far as penises go. Although Eve was “tempted” by the “evil snake,” by and large Catholics love cock. Admittedly this is a largely unspoken (though often consummated) love; but if you’re at all skeptical, just observe the shape of the Pope’s hat. Vaginas, meanwhile, represent a mysterious pink void of terror. Taming these unholy canyons of sin requires only the most Catholic of means: switching off the lights, laying down rigid and arbitrary rules, and trying not to think too hard about it.

It’s doubtful that there was ever a context in which these attitudes deserved to inform medical advice, or indeed any mainstream discourse on sex. Vaginas are great, and should be celebrated accordingly; and it’s alarming when this kind of backwardness rears its head in 21st-century New Zealand.

Two recent events have made me question just how far we still have to go. The first, which you may have heard about, was a Blenheim doctor’s refusal to prescribe the birth control pill to a young woman. “I don’t want to interfere with the process of producing life,” Dr. Joseph Lee told the Herald on Sunday. Lee, a Catholic (duh), also refuses to prescribe condoms, considers that a woman has only done her “reproductive duty” after squeezing out four little shamelings, and (seemingly apropos of nothing) reflected that teen pregnancy was far preferable to same-sex marriage – as though, upon turning 20 with no reproductive success, a person is liable to start batting for the other team.

Instead of prescribing the pill and allowing his patient to make her own vaginal decisions, Lee lectured her on the “importance of life” and recommended the rhythm method. The rhythm method (which, as a method of contraception, presumably qualifies as “interfering with the process of producing life”) involves having sex only at certain times of the month. Even if executed perfectly, it has a success rate of around 91 per cent, compared with 98 per cent for condoms and 99.8 per cent for the pill.

While it’s obviously concerning that a New Zealand doctor thinks it’s okay to use his position of power to push his beliefs onto potentially vulnerable patients, the swift denunciation that followed in the media was heartening. More concerning to me was another recent event, which you will not have heard about.

HappyPlayTime, whatever its faults, is not pornography. It’s an instructive (albeit vaguely unsettling and aggressively pink) app designed to promote sex positivity among young women. Critic contacted the University to question its decision to block the site, and the University agreed that the app was not pornography. However, it was still “other adult materials,” and would remain blocked.

This is bullshit for a variety of reasons. Firstly, the app doesn’t even fall within the definition of “other adult materials” the Uni provided, since the definition excludes sex education (which HappyPlayTime certianly is) except where the sex education is designed to arouse (and only the most deranged pervert would find HappyPlayTime’s weird vagina-baby mascot a turn-on). Secondly, it’s questionable whether the material was even “adult,” aimed as it was toward younger women; and (thirdly) it’s totally misguided to use such a broad definition of “adult” to censor material at, of all places, a university. Are university students not yet “adult” enough to be introduced to masturbation? Are you freaking kidding me?

I expected this shit from small-town Cathloic doctors, not from a place of learning. Mastubare aude, everybody: dare to wank.