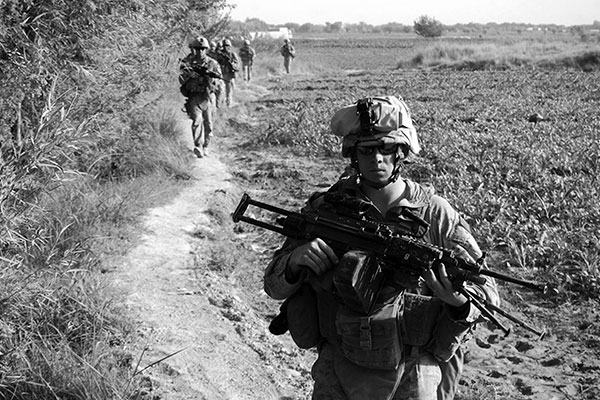 “We sleep safe in our beds because rough men stand ready in the night to visit violence on those who would do us harm.”
– George Orwell

A country in central Asia is wracked with violence. The police and army are attacked in the streets, and the rebels, funded with profits from narcotics, have sanctuary in a neighbouring country where they can resupply and regroup.

The rebels want to turn the country into a theocracy. Anyone who disagrees with their understanding of faith runs the risk of being executed by the religious police. They ban television and music. Men must wear beards, and women must not be seen in public. Girls are banned from attending school, and those who dare have acid thrown in their face. At football games, the only acceptable cheer is “God is great”. Women accused of adultery are executed before kickoff, either by beheading or being shot with an AK47.

The state is weak and corrupt. Central government can hardly control the capital, let alone the regions. Large parts of the country are unsafe even for the police to enter, and the army is riddled with rebel infiltrators. The state has failed.

The international community decides that they cannot allow this to continue. That the injustice that the people face from the rebels is unacceptable. That despite the risks they will intervene in this civil war to back up the government and protect the population.

Often war and violence are the only answer to such a problem. Evil should be defended against, and that requires brave young people to place their own lives at risk. To stand on a wall with a gun and say no. No, you will not prevent this young girl from attending school. You will not execute this woman for adultery. You will not enslave this population to your chosen faith.

Okay, so you’ve expertly deduced that I’m talking about the war in Afghanistan, and you’ve noticed that I’ve left out some pretty important points, like, the international community invaded specifically to take down a terror group. But the situation in Afghanistan is what it is today, regardless of how we got there in the first place.

The question that we should ask when we lose our soldiers — not tragically, but bravely in a firefight against those that wish to re-enslave Afghanistan’s women and children — is: how many Afghan lives is a Kiwi life worth? If we could save 100 Afghan children through the death of one Kiwi, would that be okay?

I don’t know. I don’t know how many New Zealanders we are willing to lose to make the lives of Afghanis better. Many, maybe most, people would say none. But we are all responsible in part for what’s happening in Afghanistan. And if we leave before the Afghans are able to defend themselves, to defend some basic form of democracy, however imperfect, then we will have allowed evil to prevail, and the dead, ours and theirs, will have died in vain.
This article first appeared in Issue 22, 2012.
Posted 5:17pm Sunday 2nd September 2012 by Joe Stockman.