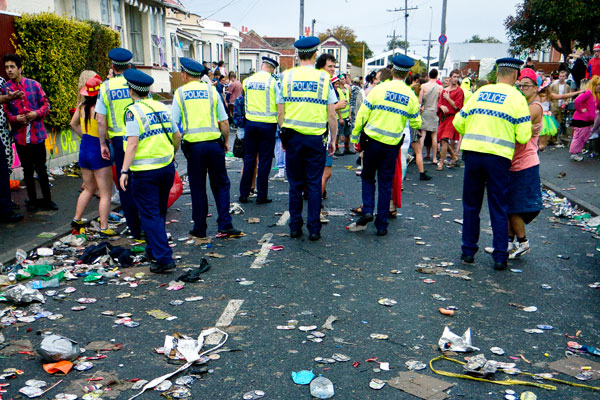 My day at Hyde Street began before sunrise. Cycling down from the NEV I could already hear the DJs playing as I passed the Richardson building. It was an energetic pre-dawn beginning to what was going to be an exhausting day. I spent hours and hours filming and taking still photos. I was there when the police closed down access at 3pm, and was still there when they finally cleared the streets at 6pm.

To say it was a crazy day is an understatement. The estimated 5,500 who made it in before the street was shut filled every conceivable space, from rooftop to backyard, doorstep to gutter. It was a celebration, and possibly a farewell, of everything Scarfie. The very, very little violence amongst so many young intoxicated people spoke highly of the attitude of those that attended the event. It wasn’t about breaking shit, or ruining anyone else’s good time. It was about kicking back after working hard and enjoying ourselves at a huge event with all of our mates.

And yeah, it cost some money to put on. A dozen ambulance officers and 30 cops don’t come cheap. But the grumpy old “ratepayers” who write letters to the ODT need to remember something: Students are the largest group of ratepayers in Dunedin; we just happen to pay our rates through our rents. Any event in Dunedin that had thousands of people attending would have taken up city resources. Why should students, who put so much money into the local economy, not be able to ask the DCC to help them run the biggest party of the year?

None of which is to say that the event was perfect. Property owners shouldn’t have their shit broken, and we shouldn’t undermine our position against the truly shit landlords by screwing over the good ones. People got seriously hurt – broken ankles don’t mend quickly – and alcohol poisoning can cause serious long term damage to your brain, damage that you won’t even be aware has happened. And no doubt some people woke up with regrets about who they may have been, ah, intimate with.

I sincerely hope that the party is allowed to continue. The things that go wrong at Hyde – excessive drinking, damage to property, and broken and upset young people – are symptoms of our greater drinking culture, not of one particular party. Hyde just brings it into one place, and into sharp relief. We need to work on these larger drinking issues, but simply shutting down an event so we can ignore it is not the answer.

A lot of you have already checked out our photos from Hyde on our “ Critic - Te Arohi ” Facebook page, (if you haven’t, then you should). We also review the day’s events in the news section, and Andrew, our Art Director and resident tech magician, has wrapped the entire magazine in an amazing panoramic photo. Carefully take out the staples and you can line the cover up with the centrefold spread to create a pretty pimping poster to chuck up on your wall. And of course, our Critic TV episode of Hyde Street will be coming very shortly.

Enjoy your break, enjoy Easter (and our Easter Bunny comic), and Critic will see you when you get back.