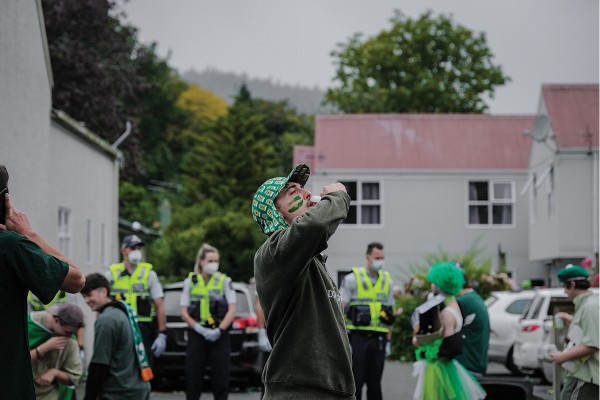 The One (Flavour of Cruisers) That Got Away

On St Paddy’s, Dunedin’s most iconic booze-slinging establishment was running notably low on green piss. Critic tried to get to the bottom of this.

A Leith Liquor employee told Critic Te Arohi that while the day itself brings plenty of Paddy’s pep and outrageous outfits, it’s actually nowhere near as busy as the previous day. “Everyone comes in the day before,” they told us, “because people don’t want to wait for [us to open] to start drinking. [The day before St. Paddy’s] has been our busiest day of the year so far, absolutely. We were trying to restock different items, but we ended up having to stop because we were so packed we couldn’t keep up.”

They said “the stuff that was flying off the shelves could simply be summarised in four words: green, anything and everything.” The drinks students most preferred, they told us, included “Glacials, Rinses, Greenhill Seltzers, and Green Nitro. Oh, and Green Scrumpy.” Based on the drink choices, Critic envisioned a mix of dried-up breatha and Auckland private school fresher, which seems like an accurate summary of Otago students in general.

One key drink seemed to be missing off the list, the bevvie that tastes more like high school skatepark regret than any other: lime green Cruisers. The reason why it was left out, though, was because they’d been sold out since the Monday before St Paddy’s. According to the employee: “We had plenty of people coming in when I was working asking for them, but we just couldn’t restock in time.”

So if you managed to get your shamrock-stained hands on lime Cruisers for St Paddy’s day, feel free to lord it over the lame, unwashed, lime Cruiser-less masses. For all those that missed out, hopefully the luck of the Irish will be on your side next year.