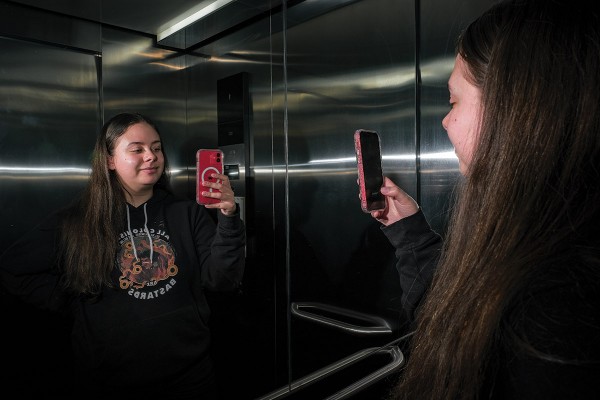 An interview with your 2021 OUSA President

After a year as President and a year as Welfare and Equity Representative, Michaela Waite-Harvey is moving on to bigger and better things next year. Like “just studying” at Otago, instead of being a student politician.

“I’m not going to completely excommunicate myself from OUSA,” she said. “I’ll stick around and help Melissa, and I would miss Charlie [the Radio One dog] too much to not come and see her.”

She thinks it “wasn’t ideal” to have an uncontested election for next year’s president. “I was worried that I scared too many people away,” she said. “I talked to them and I was trying to be realistic about what the role involves.”

Michaela is sad that the Exec had to close Starters Bar (rip). “That ended this year on a weird note,” she said. “It was a core part of our function and the way that we presented ourselves as a practical good for students. We can lay out who we are in relation to what we can do and losing that takes away from the practical service that we provide.”

Then she delivered the really bad news. “The reality is that even if OUSA finds a new student bar it will take six to seven months to get it up and running,” she said.

The University’s Covid response was different this year, too. “Last year, it felt like while there were some mistakes, we were on the same page with the University. The government came to the table. This year that didn't happen and it felt kind of like students were on their own again.”

Michaela was surprised at some of the issues that came up this year. She cites the University’s proposed rubbish fines as an example. “I thought we’d got to a point where the ridiculous stuff didn’t happen.”

She’s hopeful about the new Vice-Chancellor, David Murdoch. “I think he was definitely the right choice at the right time. He has good ideas about how the University can be better as a Treaty partner, how they can be better for Pacific communities, but also strategically how the University can just get through,” she said. “He’s a very decent human being, he has all these stories about saving the orphans in the Himalayas and it’s hard not to like that.”

Michaela is proud of finally opening the Queer Space this year, as well as finally opening the new elevator in the OUSA building, though she doesn’t take full credit for that. In her time as President, she’s most proud of the work she did behind the scenes. “I'm particularly proud of a lot of the individual student lobbying that I did. I think that's the thing that a lot of people don't see and obviously the stuff you can't report on because it's privileged,” she said. “There were a lot of students who were, say, up for exclusion, or students who were in the Proctors office, or students who had not heard back from the police, and that sort of thing. They were really struggling, and I was able to support them and help their situation.”

Even after a year as President and another on the Exec, Michaela still gets OUSA’s motto, “Audeamus” (we dare), wrong. “I always say Amadeus,” she said. “Like the movie with Mozart.”