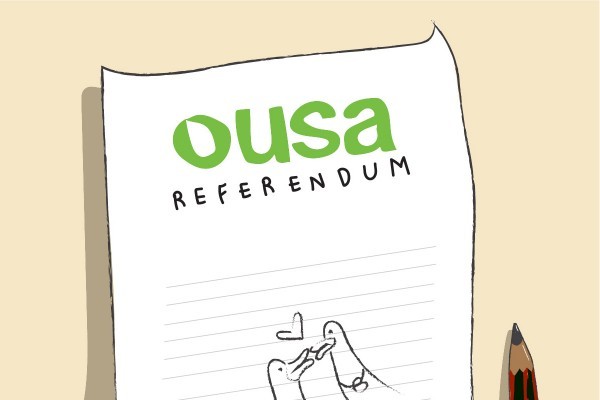 Accurately representing the views of 6% of students

Students voted to reject only one proposal in the recent OUSA referendum: calling for an Exec member to be dedicated to distance and overseas students. Over 100 pages of comments were also submitted by students, including one student who repeatedly posted the Bee Movie script as their comment for every question.

Almost every question received a “yes” vote by students this year. Some questions covered pretty boring administrative stuff such as approving the OUSA budget (which projects that OUSA will lose $129,000 next year) and tweaking OUSA’s constitution so they don’t need to post OUSA election results on both their noticeboard AND send them to student media (ooh yes, we sure do love those sweet, sweet election results here at Critic Te Arohi).

While 61.4% of students wanted OUSA to investigate adding a Sustainability Officer to the Exec, 64% of students rejected the idea of OUSA adding a Distance/Offshore Representative to the Exec, who would “contribute ten hours per week to supporting students not based in Dunedin during their studies.” This was the only proposal that was rejected among the 28 in the whole referendum.

Proving some students have very little to do apart from participate in student democracy, a whopping 125 pages of comments were submitted alongside the referendum responses. The responses ranged from the enthusiastic (“YES YES YES 100000% yes” in relation to putting a cap on international fees) to the wise (“Increase funding for Radio One and Critic Te Arohi”), the ambivalent (“sure”, “probably”) and the horrifically dumb and ill-informed (“Critic is of poor quality and so cost cuts should be made”).

However, most of the pages were actually taken up by a single student, who put the first five minutes of the Bee Movie script (from the beginning monologue to the very start of Barry’s honey-making tour) into their comment for every question. Such commitment to the democratic process must be saluted.

1,117 students participated in the OUSA referendum this year, or around 6% of their 18,000 members. When participation drops below 5%, referendum results are deemed “non-binding” or “indicative,” meaning that OUSA does not need to adhere to the results.