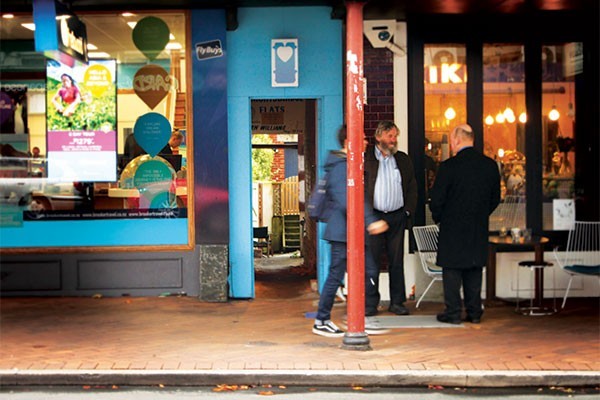 Pedestrianisation would have been better, though

In an historic vote last Wednesday, the Dunedin City Council moved to turn George St into a one-way heading south, with construction beginning shortly. It has been over thirty years since George Street was last redeveloped.

Apart from that jeweller who is now using Aaron Hawkins’ face as a dartboard, reception on George St has seemed pretty positive, with many cafes and bars posting support for the move on social media.

Local bar Woof! praised the announcement, posting on Facebook, “if a place has a great vibe, people will come to it.” While not on George St itself, the pedestrianisation would boost foot traffic in and around Moray Place and other offshoots of George St, bringing added benefit to Woof! and other places like it.

Bakery and café Side on posted to say that they “applauded the Dunedin City Council for finally having the guts to make change for the better in the face of rampant and disgustingly aggressive behaviour by many outspoken fossils.”

“Those fossils are not the majority and their anger is purely from a place of fear, not knowledge,” they wrote in the post. “Yes, some previous outcomes have been extremely poorly executed or off the mark (parklets, road dots, harbour basin concept) but we trust in the design process, the use of external experts and the process so far!”

Critic took to campus to see what students thought of the announcement. Most were behind the idea. Some believing that the council hadn’t gone far enough and should have fully pedestrianised Dunedin’s central stretch since cars would now be disincentivised to travel along George St anyway.

Even students who regularly drove up and down George were behind the move, with one telling Critic that “I’ll be gone by the time this is done, but even if I was here I can still head south and head back north via the one-way.” One particularly aged student told the Critic, “back in my day, we didn’t even have cars” which probably raises more questions than answers, but we’ll let it slide.

In a statement to the ODT, OUSA’s Political Representative Mhairi Mackenzie Everitt said that “Dunedin had fallen behind other cities in creating an accessible, welcoming and safer city centre.” With approximately half the street now designated for pedestrian access, George St will now be a much safer place for those with mobility issues.

As seems to be the norm with progressive change, the younger generations seem to be overwhelmingly in favour while the most significant resistance to the move comes from Dunedin’s older residents. We can hope that they’ll have calmed down or died by the time the work is expected to be completed in early 2024.