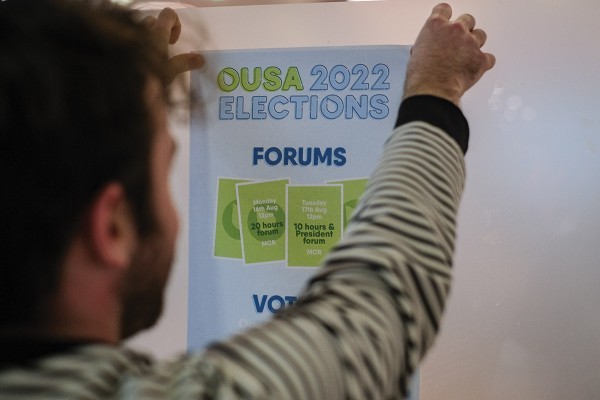 I, for one, welcome our new student overlords

A new OUSA Exec for 2022 was appointed over lockdown. The races this year were very close, with most races won by just a percentage point or two.

Three of the races were a foregone conclusion: President (won by Melissa Lama), Finance & Strategy (won by Emily Fau-Goodwin) and Political Rep (won by Te Āwhina-Pounamu-Waikaramihi). All managed at least 90% of the vote against the sole, rather unconvincing opposition candidate, a Mr “No-Confidence” (how can you trust someone with a name like that?)

However, most of the races were incredibly tight, with most candidates taking home the W by only a percentage point or two.

Despite trying to harness the might of both the SUC and the Zucc, Daniel Fitzpatrick’s online-first campaign for Academic Rep fell short by just 33 votes — a single percentage point — to Caitlin Hancy, who took in 50.8% of the vote. This was also the tightest margin of victory for all the electoral races. 59 extra votes meant Tulsi Raman squeaked home in the Clubs & Socs Rep election against Elena Cruz — giving her a razor-thin 2.12% margin of victory.

A similarly nail-biting race was seen in the three-way smackdown for Residential Rep: just 32 first-choice votes separated front-runners Patrice Le Sueur and Tat Mutingwende (with around 35% each), while Knox sub-master Rebekah Amitrano came in trailing with a very respectable 28% share of the vote. With second-choice preferences accounted for, Patrice emerged victorious, but only by 60 votes (2.18%).

Lily Marsh was elected 2022’s OUSA Welfare Rep, getting 52.97% of the vote to Anna Piebenga’s 47.03% — a difference of 165 students. Even the biggest margin of victory wasn’t exactly a blowout — continuity candidate Maya Polaschek took home 60.13% of the vote in the race against Antonia Richardson, but the difference was still just 548 votes (around the capacity of St Daves, pre-Covid).

Similarly, while Malaysian Students’ Association President Sean Teow seemed to romp home in the race for International Rep with a 14.72% margin of victory — the largest of all the races — only 29 students stood between him and fellow Malaysian Kyra Butt, who campaigned virtually from the self-styled home of democracy itself (‘Murica).

2021 showed more proof than ever that your vote really affects how OUSA is governed. And a free pro-tip: although a turnout of around 2,800 students was likely the highest for several years, trusting 15% of us (the nerdiest and most politics-studenty 15% of us) to decide on the future of your OUSA is probably not ideal. We’ll keep voting for the nerds.