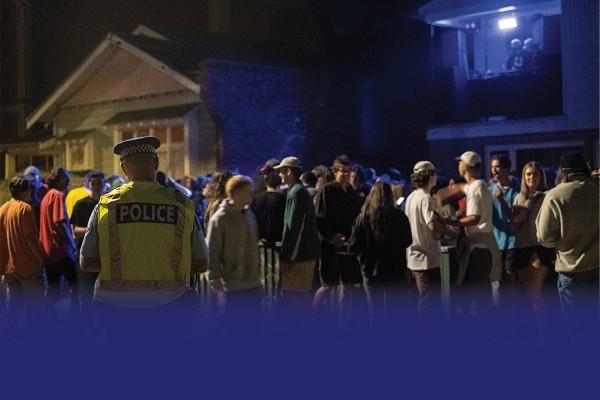 Students report that “wow, this is kinda serious”

“It was just like any other Saturday night in Dunedin, but it was on a Tuesday, which is why it felt quite bizarre when the police came in wearing full face-masks.”

Such is the scene set by Emilio*, a second-year Castle Street resident, as he described the inside of the flat party that made national news for spilling over into the early hours of Wednesday morning. Emilio said that his flat was coming back from dinner when the news of lockdown broke, and that they immediately ran into Leith Liquor to stock up. “I got two boxes of Mavs, a box of Flames and a bottle of vodka, and I think most of the rest of the boys did about the same”, he reported.

With no official plan, the boys began drinking and made their way to a birthday party. Originally scheduled for Thursday, the hosts pushed the party earlier to make it in time for lockdown. “That got shut down by the girls at about 11, 11:30. I think the majority of people there went home. But the rest of the boys, we pushed on to another flat where the party was — the one that made the news.”

Emilio, who had by this point “well and truly deleted” his box of Mavs, is a bit fuzzy on the details from here on out. What he can recall, though, is an “absolutely packed rave room with a few boys taking turns having a mix”. Everything seemed like a normal Castle Street party until police rocked up “telling everyone to leave, standing quite strongly.” Partygoers complied and walked out to be met with TV cameras.

“I was just trying to hide my face and get away ASAP so I didn't get caught on TV,” said Emilio. “I saw some people trying to get their 15 minutes of fame talking to the cameras, which I can imagine they might regret.” He said that while the party was not officially organized, it was a sort of “collective decision that everyone knew everyone was going to be drinking.”

These events were apparently “always bound to happen in a place like North D, where everyone lives next to each other.” Since the break-up, “everyone has been pretty compliant. Everyone has either headed home or sorted out their bubbles.” Emilio said that with last year’s lockdown in mind, “everyone was trying to push the limits on how long they could stay out for and drink.”

Limits were pushed, and police responded accordingly. When they arrived at the rave room, Emilio described a realization that “this was kind of a real thing that we should probably be taking seriously.”

“It was just like wow, this is kinda serious,” he said.