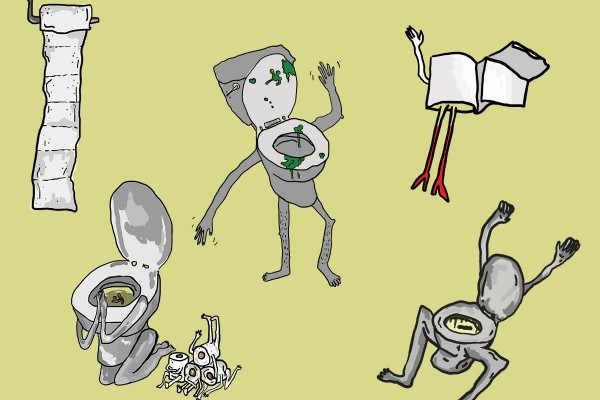 The mystery surrounding the certified-colossal craps found in Central Library

A serial shitter has struck Central Library multiple times. In at least two separate incidents, a large poo of considerable size and girth has been left on the toilet seat of the men’s disabled bathrooms on both the first and second floors of Central Library. It is possible that many more such incidents have occurred. One incident is known to have occurred on July 20.

One student, Bart*, witnessed the aftermath in the second floor bathrooms. He said, “The monster-shit was one continuous log. It began halfway up the toilet’s back, and draped continuously from there to the seat’s end, and from the seat’s end back along the underside of the seat all the way through to the basin.”

Critic contacted Dr Fairleigh Gilmour from the Department of Sociology, Gender Studies and Criminology for insight into the motivation of this faecal fiend. Though the issue of exhibitionist excretion was not strictly within a field of study, Gilmour did have a number of theories. She said: “Someone could be angry at their own lack of control in their lives; angry at the University; disgruntled at a specific staff member in this location; wanting to exert what little power they have by making someone clean up their poop.”

In the alternative, Gilmour speculated that the perpetrator is “just wanting to be gross to experience the transcendent joy of boundary violation, rattling that cage of modern bureaucratic drudgery …. They are really flouting social norms rather successfully, they might get some feeling of freedom from that.”

So far the suspects are unknown. Bart said he noticed a group leaving, “As I entered the bathroom, I saw a trio of breatherish-looking guys sniggering to each other as they left. I thought it was a bit weird, but didn’t pause to unpack it. Instead I proceeded to the disabled cubicle, the nicest and most spacious of the cubicles, to get on with the business of the day.” In hindsight he says the group left him “wondering whether they had collaborated on it.”

However, Gilmour thinks it unlikely that a group would be capable of such prolific poopery because “people are unlikely to want to explain to others their motivations for protest pooping, not least because they'd have to recognize and articulate those motivations to themselves first. This is likely a personal act.”

If you find some wild waste, send it to Critic on Snapchat so our crack team of investigative journalists can verify the find.