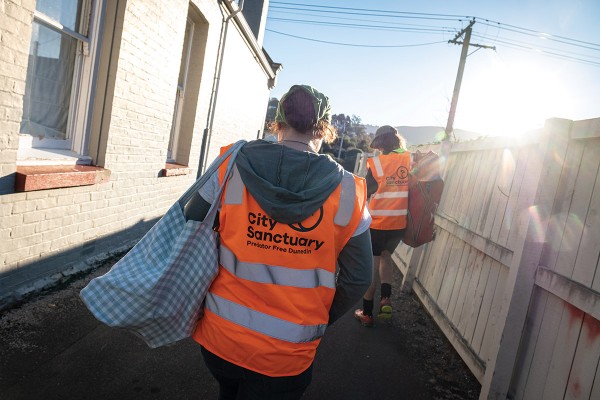 In other news, half of Critic’s staff have mysteriously disappeared

City Sanctuary volunteers have been installing backyard traps in student flats on Castle and Leith, as part of a research project investigating attitudes towards community trapping in Dunedin.

Critic Te Arohi joined Kate and Toby, two volunteers, as they installed their 27th trap of the day in a Castle St flat. Resident Kate said she wasn’t told about the operation, but was pretty stoked at the idea of free pest control. “We saw the stuff about rats on the news, and it made us kind of worried … We don’t have the safest flat. It’s kind of old,” said Kate.

A “pretty hearty” Goodnature A24 rat trap, which is self-resetting and Wi-Fi connected, was drilled into place by Kate as she explained the basics to the flat’s residents. The whole process took all of 15 minutes. Most of the 15 minutes was taken up by health and safety warnings: “Don’t stick your finger up it,” “don’t test fire it to show off to your mates,” and “don’t try to unscrew the pressurised gas canisters, because they’ll just spin round and waste all the gas.” Despite looking suspiciously nang-able, “they’re NOT nitrous,” she emphasised, and at $10 each they would be terrible value as a cream charger anyway.

City Sanctuary installed the traps as part of a project studying attitudes towards community pest trapping. They’ve placed the traps in three Dunedin suburbs: Bougie Māori Hill, middle-class Caversham, and North Dunedin (you can probably figure out where we lie). Their aim is to get traps in 10% of their target suburbs (that means for Studentville, 85 flats). Half will get the fancy-pants A24, with the other half getting a bog-standard Victor Professional mousetrap. Kate suspects people will like the A24 much better, but they also cost $180 each, plus $10 for the nang — whoops, I mean, gas canister. The ol’ reliable Victors are only $7 a pop.

While the City Sanctuary team seemed keen to go all night if they needed to, it was a Saturday evening on Castle. Parties were kicking off and the team decided to pack it in. “Everyone’s drinking, it’s high-risk for traps, and we want people to remember what’s happened,” said Kate.

With 28 traps installed in just three hours, though, they were confident of a job well done. Anyone interested in hosting a wee pest trap of their own can go to: https://www.citysanctuary.nz/north-dunedin.