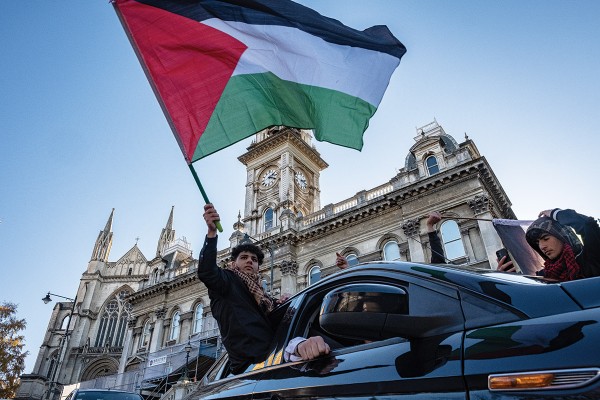 Protest! Dunedinites Show Up in Support of Palestine

Palestine protest “could use more voices”

Amidst chanting and handmade protest signs, Rawaa Elhanafy made her point clear: “From the land to the sea, Palestine Will Be Free.”

Rawaa, a third-year Pharmacy student, was one of the organisers of the Dunedin March for Palestine. She and hundreds of others marched down George Street on Saturday, May 22, to express their solidarity with Palestine. “This is not a war; this is a genocide,” said Rawaa. She emphasised that “it is not a conflict”, because the strength and funds between the two sides are totally different.

She said that the support from Dunedin’s local community has been incredible and heartwarming, but more voices are needed.

“The support that we have gotten from over the past two rallies was flattering, but the fight must continue. As we have seen in the past, a ceasefire is not the answer. One thing we could learn from the past 73 years is that the only person I believe that could make a change is God. I pray to God everyday and wish that one day my family and I could see the unification of my Motherland,” said Rawaa.

Rawaafirst arrived in Christchurch in September 2009 with her family. She said that following the news from afar has affected her mental health. “I could not bring myself to class. Assignments started to pile up, but here I am, worried about my grandparents and cousins in Gaza. It has been confusing and tiring. I didn’t want to be around people, I just wanted to be by myself,” she said.

“Every time this happens, it always makes me angry. It makes me feel suffocated. Yes, being in New Zealand, Alhamdulillah [Praise to God] we are safe but watching the news from here makes me feel angry and scared.”

“I might sound selfish but I wish I was back in Palestine with my bigger family and friends. At least we can all go through the hardship together. Nothing is worse than being happy here in New Zealand when you know that your own people are suffering back home. If I look away, that is called privilege,” said Rawaa.

The recent unrest began during the last ten days of Ramadan last month when Israeli police in the city blocked off the Damascus Gate, a popular gathering place for Arabs during Ramadan. Jewish settlers tried to evict longtime Arab residents of Sheikh Jarrah, an Arab neighborhood of East Jerusalem. Israeli police raided the al-Aqsa Mosque, Jerusalem’s holiest site for Muslims, located on the Temple Mount, which is also the most sacred place in the world for Jews.

Hamas, Palestinian militants, fired hundreds of rockets in response to Israeli attacks. The Israeli military, with far more resources than the Palestinian, has launched hundreds of airstrikes and amassed thousands of troops and reservists along the border.

The unrest ended in a ceasefire on Friday May 21. 248 Palestinians were killed, including 66 children and scores of fighters. More than 1,900 were wounded in Gaza. In Israel, 12 people, including one soldier and two children, were killed by Hamas.

“Palestinians have a right to self-defense against Israelis,” Rawaa said.

Some believe that this is a religious matter, but for Rawaa, this is not about inciting hate between religions. “I am not here to start a religious war. There are Palestinian Muslims and Christians that stay and live together on occupied land. Both face the same atrocity from the Israeli government. Not all Muslims are terrorists, and not all Jews are Zionists. There are many Jews that have publicly spoken out about Israel’s wrong-doings.”

Social media has played a huge role in spreading the news from Gaza. Hashtags such as #FreePalestine and #SaveSheikhJarrah have flooded social media with information and ways to help.