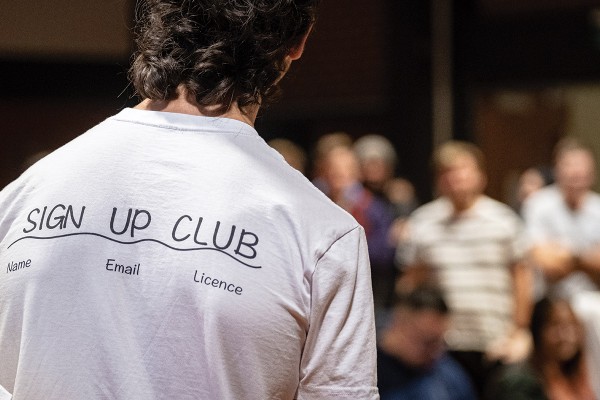 Sign Up Club fails to enact memes, succeeds at being an ally (maybe)

Sign Up Club’s 30 April OUSA SGM ended not with a bang, but a fizzle. The only motion to pass was an increase in pay for ex-officio positions at OUSA.

This raised the pay for the Te Roopū Māori Tumuaki Karamea Pēwhairangi and Pasifika Students Association’s President Melissa Lama, both of which were in attendance and both of which applauded the unanimous vote. Melissa Lama, head of OUPISA, said that she was “beyond grateful that we had so many allies at the SGM”, and that she was “especially grateful to the Sign Up Club for putting this motion forward.”

Quorum was met, with club members pulling in students from the hallway. Many from Facebook were in attendance, and the quarter-full room waited with baited breath for the meeting to begin. Immediately, the motion to raise ex-officio pay was raised to be the first item on the agenda, so that the people who were there to vote on serious issues didn’t have to sit through debates about cutting the pint night line.

But it didn’t matter. George, who chaired the meeting, followed the vote to raise pay with an announcement that the remaining motions were in breach of the OUSA constitution and were therefor invalid. There would not be a second Hyde Street. Everyone could now go home. It lasted 20 minutes.

Financial Rep Josh said that he didn’t want to “be a buzzkill”. When speaking about why the Hyde Party motion violated rules, Josh expressed that while he had to uphold the constitution, he didn’t want to prevent students from doing what they want to do.

The obviously upset crowd requested to at least conduct a straw poll to demonstrate interest in the motions presented, which went ahead. Support for another Hyde Street was popular, but after it was straw-polled, SUC president Reid and VP Devon announced that the meeting was more or less a moot point. “Thank you to everyone for coming,” they said, dejected.

The motions failed to pass because the wording was “only slightly off”. OUSA executives were heard immediately following the meeting expressing that had the motions been worded slightly differently, they would have been eligible and very likely passed. “Sign Up Club definitely had the support of the crowd. They had the numbers. I think they would’ve passed anything they had worded better,” said SUC supporter, impartial observer, and Critic Te Arohi Editor Erin Gourley.

Two motions in particular did not violate OUSA’s financial clause: Making the Bills the mascots of the Uni, and requiring all OUSA email correspondence to include “Sign Up and Tag Three Friends” in the signature. Had the Bills been motioned to be OUSA’s mascot rather than the Uni’s, it may have been an eligible motion. Critic still isn’t sure what was invalid about the email signature bit.

OUSA has been trying to increase student involvement and voter turnout for years. “You’d think that they would have given us a heads up that we needed to change our wording” said one Sign Up Club voter. “You can’t ask students to get involved and then shoot them down when they try to do exactly that.”

The club’s Exec were “not sure” if they wanted to try again, but students remained interested in the issues presented. Despite the invalidation, 100+ students still rallied and attended a last-minute SGM to vote on their interests. If nothing else, Sign Up Club has demonstrated the power of turning your internet friends into real-life friends.