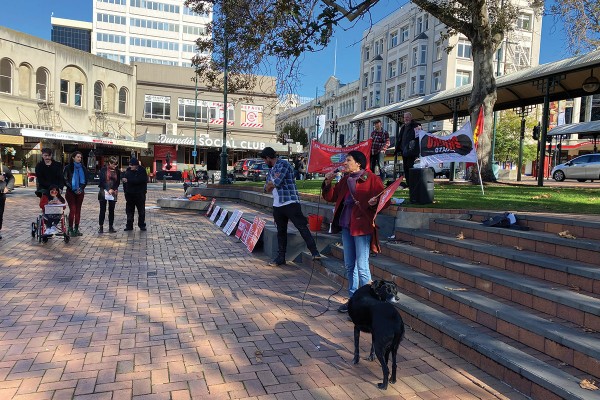 May 1 saw two protests happening in the Octagon simultaneously, with organisers lamenting a lack of student activism in a city once known for rowdy student-led protests.

The annual J Day protest, organised by the Ōtepoti Cannabis Collective, was designed to continue pushing for cannabis law reform, in light of the “momentum for change from the community”. Held in the upper Octagon, activists relaxed in the sunshine, chatted and, yes, smoked from “High Noon” to 4:20pm as hip-hop music played. However, of the 20–30 protestors in attendance at the event, Critic Te Arohi could only count a handful of student-aged people, with most being in their 30s or older.

Phillip, who was at pains to point out “I’m a Gen-Xer, not a boomer,” was happy to be out in the sunshine, “doing what we should be allowed to do anyway.” Despite his cheer, he told Critic Te Arohi that the turnout was “disappointing”, saying “it seems to be hard to get people out to speak”.

Jai and Sam, from Students for Sensible Drug Policy (SSDP) said that these protests should be “another opportunity to show how many people support the movement.” “The debate is done,” they said. “We’ve seen how it’s done all over the world … [cannabis legalisation] is going to be overwhelmingly positive.” Although admitting there weren’t many students at J Day, They said “I guess that’s why we’re here, right? To be a student voice for this thing.”

Student Thea observed that “there are a lot of students who smoke that aren’t here, who are scared of the repercussions it could have on them.” But she had a simple, positive message for people hesitating to get involved: “The more of us there are, the less they can do anything about it.”

Just across the Octagon, Unions Otago was commemorating International Workers’ Day by protesting to support those out of work, and struggling with a benefits system “where people aren’t allowed to live properly,” according to First Union representative Sonia.

Chris, who has cerebral palsy, challenged the Government to “stand by the history of the Labour Party … we as a country are an egalitarian country,” adding that “disabled people should be able to enjoy a dignified life, rather than a life of subservience.”

Jen, from Extinction Rebellion, argued forcefully for systemic change, saying environmental consumer choices were mostly a distraction for the wealthy. “Don’t shame and blame individuals for taking part in a system they may not like or agree with, just because they’re trying to make ends meet,” she said.

Of the approximately 50 in attendance just a handful of students were present. This fact wasn’t lost on Jack Brazil, an activist who was the Green Party’s Dunedin candidate at last year’s election. Jack thought students “could mobilise a hell of a lot better. We saw them mobilise for a bong about two years ago. It’d be nice if they could do the same for the more vulnerable members of our community, the more marginalised members.”

Dave Kearns, Otago branch secretary for the Railway and Maritime Transport Union, agreed: “Young people could do a heck of a lot more. We’ve got a tradition of political and social activism.” However, he felt the future of student activism was promising. “When I see students or high-schoolers at the protests, like the School Strike 4 Climate, I go ‘Thank you,’” he said, gesturing to a vague higher power. “Because the people who are making the change are also heading it. That’s your future you’re fighting for, not ours.”

When asked how students could make a change, Jack encouraged people to “find out about what you’re passionate about, and talk about it to everyone you can. When you find people who are as passionate about it as you are, work together and make some change.” A disciplined group united towards one goal can be immensely powerful, as any Sign-Up Club member would tell you (also, sign up and find three friends).

Dave was more hesitant to lecture, telling Critic Te Arohi that “there are so many different ways (to get involved), and it doesn’t necessarily have to be through a traditional union. If it is, that’s great, but at the end of the day you’ve got to find your own path.” Since the protest, the Labour government has announced a three year cut on public servants’ incomes, despite subsidising Jeff Bezos’ Lord of The Rings prequels to the tune of $160 million.