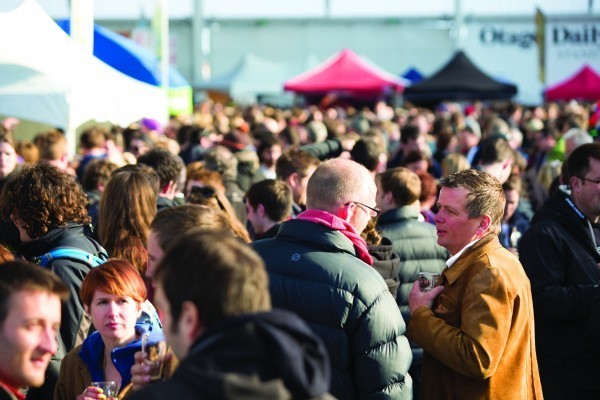 You can now go to Beerfest twice a year

The Auckland Beerfest run by OUSA went well. “We think there’s about 3,600 people here,” said OUSA Events Manager Jason. He spoke over a background of rambling guitar and slurred conversations.

“OUSA gets some funding from the uni, but we are constantly having to find new revenue streams, and sometimes that means taking a risk,” said Jason. Based on how lit the Dunedin Beerfest gets, OUSA decided that an Auckland version would bring in some cash as well.

And it was indeed a busy weekend. LAB was playing, the Beacon Festival was on, and the Home and Living show was pumping. Still, a couple thousand punters showed up to get pissed on craft beer, despite the many options of what to do that weekend. “Ah yeah issha great time bru,” slurred one man. “We’d definitely come again next year,” his missus said.

Jason reported that a good range of people came. “We’re really happy with the turnout,” he said. “Even if they’re dressed like Aucklanders, haha.”

The event made money for OUSA and breweries advertised Dunedin with a pint in hand. Posters showing Dunedin in all its glory were hung, and a big gothic Dunedin sign was displayed at the front of the event.

But some people were too sloshed to recognize that. “What, really? It’s from Dunedin?” said one festival-goer. “Dunedin is, like, way on the other end of the country. Wow.”

Regardless of whether or not punters excelled at geography, OUSA still pocketed their cash. “I’m like six drinks down,” said another man “so I guess I’m vibing. I’d definitely come again.” Ticket sales helped OUSA raise money this year, and based on the success, Jason said that they’d likely do it again.