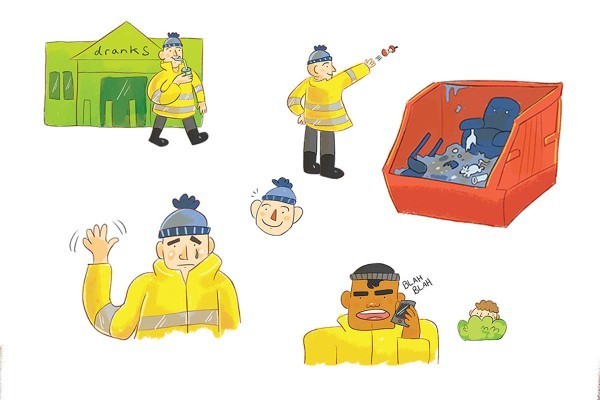 It’s hard to recycle in the city, according to concerns raised by students. Residents flatting in the CBD and George Street’s retail district do not have access to kerbside recycling.

The Dunedin City Council has implemented three $80,000 neighbourhood recycling drop-off facilities. Two are on Moray Place, and one on Vogel Street, but students have reported difficulty in accessing them.

Shannon, who lives in a retail district apartment, has a physical disability and describes the process of going to the site as “painful” and “tiring”. Without a designated recycling bin, her household resorted to filling up large crates and bags to then be driven to the drop-off facilities.

“I can’t park my car in town,” Shannon said. “I have to park it up a hill, so that’s a whole thing. The alternative is having to walk several blocks with boxes of recycling. I’m less inclined to do it so often, which means it piles up, which means it’s an even bigger job.” The entire recycling process can take upwards to an hour.

Jack flats in town and does not have access to a vehicle. His flat used to collect their recyclables and walk to the “big public bin thingies”, but it eventually became too much of a hassle. “We've become lazy and complicit in blowing up the world by just trashing everything,” he says. “Please don’t tell my mum,” he hastily added.

Oscar only recycles his cardboard. Glass, plastic, and cans are all chucked into a black bin bag. “I feel really bad about it and we shouldn’t do it, but otherwise we have to stack it all up, fill up boxes and boxes inside my apartment, which is small as it is, and every three months or so, get everybody together to do a trip to the centre by countdown. We’d need a car.” Oscar does not have a car. Cars are also bad for the environment, so that’s a whole ‘nother can of worms.

Twenty five cardboard recycling stations exist in town, but are exclusively for businesses that have signed up with the DCC. “I would like to see a change,” said Shannon. “They have recycling solutions for businesses, but absolutely nothing for residents. I don’t want to not recycle, I don’t really want to see the heat death of the universe in my lifetime.”

Lily, who is woken up weekly by these recycling bins being emptied but is not allowed to use them, describes it as “ridiculous”. One criminal flatmate has taken to illegally dumping recycling in business’ bins. She said that it’s “bullshit that [they] have to break the law to help save the planet”. Kinda radical tho.

The DCC said the lack of kerbside collection is due to busy streets and pedestrian areas raising safety concerns for the general public and collection staff. They are currently in the process of reviewing kerbside collection, which you can contribute to via their very official Facebook poll.