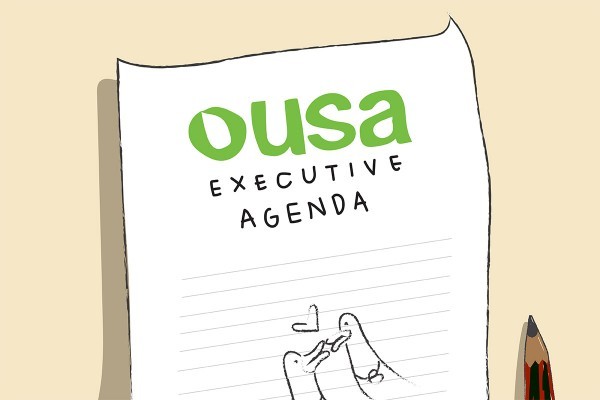 Once a quarter, Critic Te Arohi put themselves through the punishing process of reading and summarising the OUSA Exec’s reports for you, our readers. We do it because the only emotion we’re capable of feeling at this point is pain and we kind of like it we feel a strong sense of duty and responsibility to students in helping keep OUSA accountable. So here goes, arranged by time of submission to OUSA:

- The main focus of OUSA’s chief beancounter Josh Meikle this year is that OUSA never quite has enough beans to spare. He’s noted opportunities to squeeze more beans out of JAFAs (through the Auckland Beer Festival) and rich probably-not-students renting out the University Bookshop apartments. He’s also reached out to other student reps from Otago’s other campuses (Christchurch and Wellington), to strengthen their call for more beans from the Uni. Keep on squeezing those beans, Josh.

- Our President Michaela Waite-Harvey has, it seems, had a hectic first quarter, with her 45.8 hours per week of work being spent as OUSA’s official spokesperson including “many requests for comment from Critic” (nice), chairing Exec meetings, sitting on at least 16 committees, boards and working groups, as well as helping out at Summer in Dunners, O-Week events and the legendary Drop for Good. She also attended Harlene’s farewell function at the Staff Club, presenting the Exec’s gift to her — a sterling-silver fern pin.

- OUSA Political Rep Mhairi Mackenzie Everitt has spent her first quarter writing multiple submissions to both local and national government in an attempt to make pending legislation more student-friendly. Being a non-election year, there’s less political interaction, but Mhairi has made herself known to the local Labour trio of Ingrid Leary, Rachel Brooking, and David Clark. She will lobby on behalf of students should the opportunity arrive. She is also looking to run another Politics Week in semester two and has appeared in both Critic and Radio One over the past few weeks.

- Returning Residential Rep Jack Saunders has been a busy boy, carrying over a bunch of work from last year as well as being in the process of forming new committees to talk about colleges and stuff. We’d be remiss to not mention him simping for Critic and thanking us for our work on the Flatting Magazine. Most importantly though, he’s trying to sort out all the freshers getting access to cuddle fixes during exam seasons, which is an absolute priority that must be sorted immediately. Jack: let the dogs out.

- Coming in at 2856 words, this is one of the heftier reports submitted by a member of the Executive. Welfare and Equity Officer Maya Polaschek has actively been working on a partnership to provide free and sustainable sanitary items to the students of Otago, and also working with the Parent Students’ Club to improve the facilities available to them. Hell yeah. Maya has also got involved with multiple committees to ensure that students are getting proper representation during their time at Otago.

- Postgrad Rep Sophie Barham has sought to compensate for the disruption and isolation of 2020, welcoming postgrads with a bang(in’ selection of events), as well as keeping a close eye on distance and satellite campus student wellbeing. Despite already running the annual exec retreat and planning day, a stall at Clubs Day, and two morning teas, she notes that “I have not spent any of my executive budget,” although this is meant to change with bigger events coming up. Time to flash the cash, Sophie.

- Among Administrative Vice-President Emily Coyle’s most notable contributions: her time assisting President Michaela and liaising with the rest of the Exec, her knowledge in organising training and mentoring for Exec members, and “significant amounts” of her “blood, sweat and tears (literally)” that went into the Drop for Good. While there is no mention of how much funds her bodily fluids raised for OUSA, Critic Te Arohi salutes her selfless dedication. Mi casa es su casa, and it also seems mi sangre, sudor y lágrimas es su sangre, sudor y lágrimas.

- The Clubs and Socs Rep (not to be confused with Clubbing and Shots Rep)  Dushanka Govender had a more tranquil first quarter, with most club events only beginning the week before the report was submitted. She worked over 10 hours every week since late February helping the year’s clubs get up and running, promoting the diversity of OUSA-affiliated clubs to students, and making sure the clubs knew she had their backs.

- The bulk of Academic Rep Michael Evans’ time in first semester was focused on attending meetings of the University Senate, Board of Undergraduate Studies and at least five different working groups. While we were convincing ourselves that we’re ‘still getting into the uni routine’ five weeks after O Week, this absolute sucker for punishment said he has been “enjoying reading through,” and giving feedback on, academic proposals. One person’s trash is another person’s treasure, it seems.

- President of the University’s Pacific Islands Students’ Association Melissa Lama has steered UOPISA through the first quarter of the year without any problems, keeping in touch with groups like Tauira Pasifika and the Pacific Leadership Group. The latter is developing a Pacific Strategic Framework, which Melissa is ensuring that students have an impact on. She is also planning a Pasifika Mental Health Campaign, as well as establishing an office for UOPISA, and lobbying for a Pacific Arts and Performance paper to be added to the Summer School programme.

- Te Roopū Māori Tumuaki Karamea Pēwhairangi has focused her first quarter efforts on ensuring that TRM has a voice in ongoing university affairs, meeting regularly with OUSA President Michaela Waite-Harvey and UOPISA President Melissa Lama to plan events and ensure representation. She has also started to update TRM policies and their constitution to lay foundations for future executives. She also wrote a new karakia for the OUSA Exec that is now used to close all meetings.