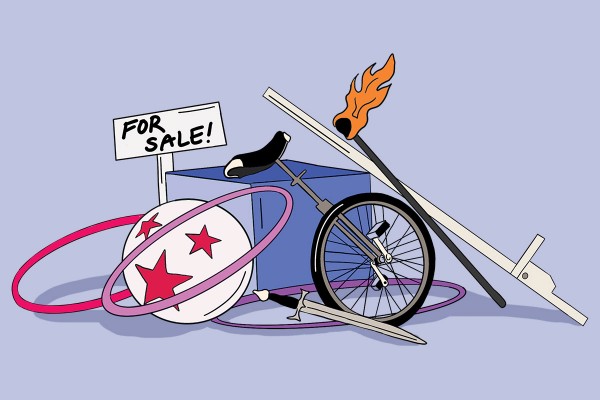 Critic doesn’t suggest money laundering through OUSA clubs, but we don’t NOT suggest it

OUSA has $10,093 set aside from selling equipment belonging to old clubs. The money is currently held in trust for future clubs who are similar to the old clubs that were disaffiliated.

OUSA came across this issue when discussing whether to sell the Dunedin Fire and Circus Club’s equipment. As they were discussing, they realised there was a bigger issue: what the fuck do you do with the equipment that old clubs leave behind? Who needs a dozen sets of fire poi?

Someone probably does. For instance, a potential future “fire poi club.” So the value of those hypothetical flaming poi should be saved.

In the meeting, OUSA President Michaela Waite-Harvey described this as a “recurring issue”.

The current process is that OUSA can sell the equipment and hold onto the money for future clubs with a similar purpose. For example, if another circus club was to start up, they might be able to access the money that came from selling the DFCC’s equipment. But, as Michaela pointed out in the meeting, that club might never come along.

“The amount [for each club] in trust is not public information, nor is the type of groups it may benefit,” said Dushanka Govender, OUSA’s Clubs Rep. “We can understand one’s perspective of why they’d want to know but need to be cautious that the fiscal benefit isn’t the main influencer for establishing the club.”

The DFCC, which was disaffiliated from OUSA after last year’s scandal, left “a lot” of equipment behind, apparently enough to fill a 10m2 storeroom according to Dushanka. OUSA can’t keep storing gear from old clubs that no longer exist — they just don’t have the space.

The equipment included “hula hoops, juggling and balancing gear, training aids, learning resources and spinning gear” but the full extent of it was not known because the club had not done a formal stocktake before they were disaffiliated.

“OUSA observed a weakness, and potential opportunity for better optimising funds and assets when clubs disaffiliate,” Dushanka said. “Staff wanted to highlight this to our executive for discussion and direction going forward.”

Critic endorses Jack Saunders’ proposal, which was to “build a new Vice Chancellor” using the robotic arm and the 3D printer.