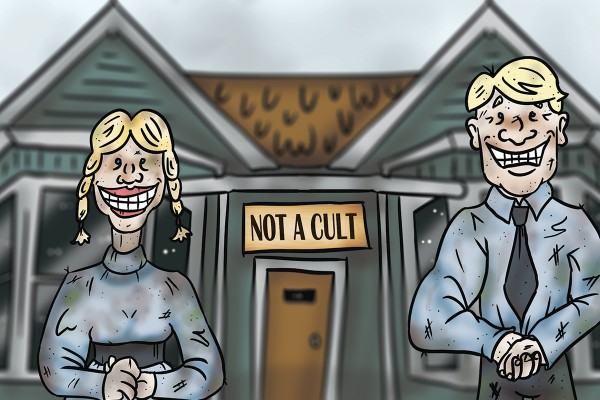 Club has ties to controversial church, also takes up a lot of car parks

“I lived across the street from the Campus Christians on Grange. They were weird, but not “bad weird.” They were just very exclusive, and I never saw a new face.”

Kayla’s biggest problem with the Campus Christians was that they’ve “monopolised the parking” on Grange Street. She, like many Otago students, was unaware that the insular community has ties to a highly divisive church. “That makes a lot of sense,” she said, when told about the group’s controversy.

Otago Campus Christians, an OUSA-affiliated club, own a complex of flats on Grange Street with at least 20 rooms. For some students, the group is a close-knit family of like-minded Christians. For others, it is a controversial and isolationist group with concerning behaviours.

Keira*, a former resident of their flats, found that “something felt off” when she first attended their Bible studies, which she put down to “cultural differences”. She moved into the Grange Street flats in her third year.

“In our contract, we had to sign that we would go to their church services every Sunday,” she said. Along with a few other residents, she attended another church at the same time, and said that “the [Campus Christians] didn’t really like that.”

The Campus Christians ended up instituting compulsory flat meetings when Keira’s other church services were on. “I would try to sneak out to go to church,” she said. “Even though it was never made explicit, they made it very difficult.”

The Campus Christians’ mandatory services involved “reading this Bible study book, which was all written by this one guy called Witness Lee, and everyone would have to stand up and say what they enjoyed. That’s their equivalent to preaching,” said Keira.

Keira said that the backlash from attending a ball run by the Otago Combined Christian Groups was “worse than if we’d attended a non-Christian event”. With her concerns mounting, and finding herself unable to trust her flatmates, she turned to her church pastor for help. His response was, “If you were my daughter, I would be telling you to get out.”

Otago Campus Christians are not a standalone Christian group. They are affiliated with “The Church in Dunedin”, which is part of “The Local Church”. Founded in China by Watchman Nee Tuo Sheng, the Local Churches were, until 1997, led by Witness Lee Chang Shou. Nee and Lee are still seen as major authorities within the church, with study of their extensive collection of Bible study books and speeches strongly encouraged for members.

Each branch of the church is known as ‘The Church in [Name of Town]’. They also operate university clubs under the name ‘Campus Christians’. Some of their beliefs, according to Witness Lee, include that: “There is only one church in the universe, and only one church in each locality.”

Ed*, another student who attended their Bible studies, said that, “some things felt a bit off. The community was pretty insular. They didn’t encourage looking for the church that was right for me.” He “never felt comfortable being there,” eventually choosing to “drift out of it and slowly cut off talking with them.”

Despite his negative experience, Ed also found they were “all friendly and eager to make newbies comfortable.” Bethany*, a student who attended Bible study courses with them in 2019, said that they were “lovely, caring and generous people who supported you not only in the religion but in study.”

Critic Te Arohi interviewed a group of students who are current members of the church. Most lived in the flats and some had lived there for several years. While most of them were raised in their town’s Local Church, some came from other church backgrounds.

Asked about Lee’s statements, they said it was a case of “misinterpretation”. They affirmed that other churches’ members are “all Christian”, with one saying that “everyone has their own experience of the Lord. If they’re drawn to another church, that’s fine.”

They said that there are residents of the Grange Street flats who did not attend The Church in Dunedin, and some who were not even Christian.

All stated that while they were never pressured into reading Lee or Nee’s works, or discouraged from reading texts by other writers. They said that management of the flats is very hands-off, and claimed that there were “no compulsory events”. One student said: “I wouldn’t be here if I was forced into doing anything.”

Campus Christians said that “Bible study participants are not prohibited, or discouraged, from using other texts.” However, they defended their church’s strong emphasis on Nee and Lee’s works, saying that “it is fully within the rights of a Christian group to decide to follow a certain ministry … [we] have certainly seen the value in the ministries of Watchman Nee and Witness Lee and desire to follow their ministries.”

Despite their controversies, not everyone agrees that the label “cult” fits the Local Church. Theologian Alan Weathers said, “This in essence what a cult is — it makes the claim that their view is an exclusive one, set off from other institutions of Christianity while viewing these other institutions as an error.” On the other hand, the Christian Research Institute, a major anti-cult think tank, publically retracted a previous statement calling them “an aberrant Christian group.” Following a six-year investigation, they published this retraction under the eye-catching headline “We Were Wrong”.

Otago Campus Christians do not maintain a high profile. They are generally unrecognised by students, and while their affiliate churches around the planet have raised controversy, Otago’s local branch has not made the headlines.

“I just can’t believe how many car parks they have,” said Kayla, “this is the reason there’s a four-year waiting list for an authorised park in Dunedin. That’s the real story here.”