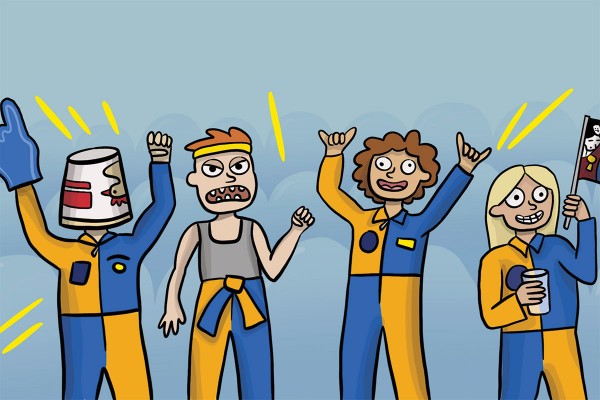 A paean to corporatized expressions of commodified culture

Being born and raised in Dunedin, I’ve got a special place in my heart for the mighty Highlanders. I was there for their last game at Carisbrook over ten years ago, I watched as we lifted our first trophy in 2015. Since arriving at uni, I’ve been to almost every ‘Landers game at Forsyth Barr Stadium.

Through all of the ups and downs, nothing pisses me off more than watching freshers stream out of the Zoo with ten minutes to go in order to sink another shitty RTD and wobble to town only to fuck out in the middle of the Octy because they have the alcohol tolerance of a toddler.

That ten minutes really doesn’t matter to you, but it definitely matters for the players on the pitch. It doesn’t matter if you support the Highlanders, Crusaders or one of the shit teams from up north, or even if you’re watching a completely different sport. Stay until that siren goes or that final ball is bowled. I think it’s pretty demoralising for the players to be battling out on the field only to see bored freshers ditch to get on the rark ten minutes earlier.

Sure, I can understand if you’re not a huge rugby fan and you’re just there to vibe with your mates. However, if you want to ditch and head to town a bit earlier, just watch the game in your hall or your flat and no one will care. But if you decide to physically go to the game, be prepared to stay there for the full eighty minutes and support the boys until that final whistle is blown. Forsyth Barr isn’t a huge stadium, so you can’t use the argument that you avoid the crowds by ditching early. It’s a five minute wait at most.

Matters of respect aside, you miss out on some thrilling finishes. I’ve watched the Highlanders pull a win out of absolutely nowhere in the dying moments. Imagine if you’d left the ninety-minute thriller that was the first Bledisloe game in Auckland last year at the seventy-minute mark? You’d be kicking yourself.

It doesn’t matter if the game seems to be over. If your team was winning, you’d stay to the end to watch them reign victorious. You don’t leave a concert early just because you know what the last few songs on the set-list are, and leaving the game is no different.

So freshers, for fuck’s sake, if you go to the game, wait until that siren goes and the final whistle is blown. Show some respect for the players who pour their heart and soul into playing the game. Your life isn’t going to be any better for getting some weak vodka into your veins ten minutes earlier, but you might just witness your team snatch victory from the jaws of defeat and hear the Zoo roar.