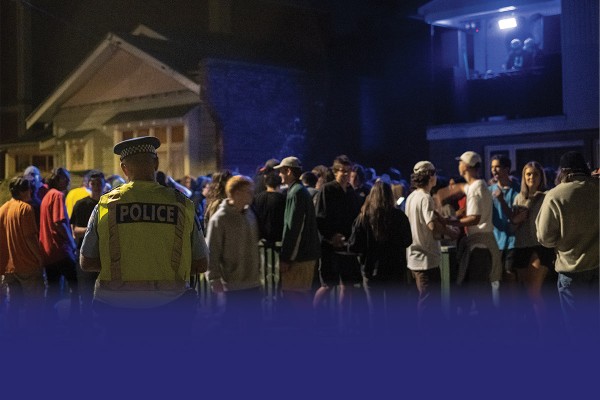 Students “very good”, get a pat on the head from Campus Cop

Police vans, as well as marked and unmarked police cars, regularly patrolled the Castle/Leith area during Flo and O Week, as early as 6pm. Critic can confirm that this wasn’t just a figment of boozed-up paranoia. There were actually more police than usual.

On Big Red Finale night, two police cars were seen. With lights flashing, they were blocking the entrance onto Castle Street from Dundas, while up to 15 officers in high-vis vests patrolled along the street.

Students seemed relatively positive about the high-profile police presence. Ryu, a three-year veteran of Castle Street parties, noted that the “cops were decent,” while another student agreed that they seemed to cause “no trouble,” and that they were “not interfering”. A group of third-years called the police “a necessary evil,” claiming that without them “the whole thing will turn to chaos”.

Campus Cop John Woodhouse confirmed that since 2019 the police have shifted to encouraging street parties where students can “recognise police prescence”. This change comes after the tragic death of Sophia Crestani at a flat party in 2019. Police have also sought to give “as much presence to our small numbers as possible,” by wearing high-visibility clothing and actively moving through the crowd.

John insisted that the police’s presence is to “make students feel safe,” rather than to aggressively shut down events. Overall, John considered Flo and O-week to be “a huge success” with the vast majority of students’ behaviour generally being “very good”. Woodhouse said 11 out of 12 nights went smoothly, except for Friday night, when “significant violence and drug-dealing” forced an early shut-down.

The main problems of O-week were not high-schoolers (to freshers’ surprise) or the Mob (to everyone’s surprise), but people travelling from as far as Central Otago and Oamaru for our annual weeklong bender. A very dedicated effort, from people “intentionally looking to disrupt” student celebrations. Critic suggests that according to the logical progression of this issue, next year students should be on the lookout for wine-o’clock mums, and boomers in general.

Regarding irate residents, Woodhouse said, “they have to recognise this is a university city, and there will be celebrations involving noise, and sometimes that may be the price you pay for having … such a large education industry.”