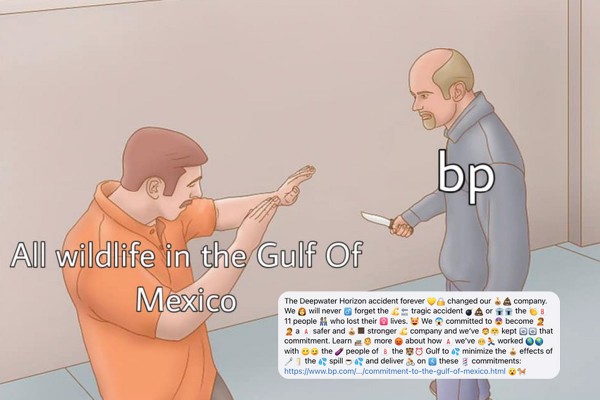 Maybe cyberbullying energy corporations will stop them destroying the planet

Shitposting page The boys are what has started a campaign to bring down international oil giant BP by tormenting them on Facebook. On 9 February, at 6.30pm, The boys are what opened their campaign with a post that said “good evening, fuck BP.”

Over following weeks, The boys are what shared content from BP’s page with instructions to spam the comments section with reference to the Gulf of Mexico oil spill. Followers of the page now comment on all of BP’s New Zealand posts.

The boys are what has issued a list of demands to BP, threatening to continue the harassment until BP asks them to stop, or they offer free pies from their stations for one day each year. BP has yet to respond to either of these demands.

“We don’t plan to stop until we’ve run them out of business,” said the admin of The boys are what in an interview with Critic.

The first BP post shared by The boys are what was a bizarre attempt at PR. It was a picture of 3 rows of 6 multicoloured ice creams, with BP asking followers to find the matching pair. It is unclear whether there is any context behind this post.

The boys are what told their followers to make jokes about the 2010 Gulf of Mexico Oil Disaster in the comment section of the ice-cream post. “My local does a crude oil free ice cream, have you thought of looking into this yourselves?” wrote Scott Chegg. “It’s pretty hard to tell the ice creams apart when they’re covered in 4.9 million barrels of crude oil,” wrote Ananya Shamihoke.

Further examples from The boys are what included sharing a post from BP describing their new car-washing technology which resulted in a barrage of similar comments. The boys are what do not even need to share BP posts anymore. Their followers have taken it upon themselves to comment on new posts from BP.

BP has not responded to Critic’s request for comment. In response to the jokes about the Gulf of Mexico, they repeat a standard statement on most of the posts: “The Deepwater Horizon incident forever changed our company. We will never forget the tragic incident or the 11 people who lost their lives. We committed to become a safer and stronger company and we’ve kept that commitment.”

The boys are what has been assisted in its efforts by 28 Year Old Male, an Australian shitposting page. 28 Year Old Male now frequently comments on BP posts, asking in one comment: “The cones look kind of oily, did you spill some of your product on them?”

28 Year Old Male has taken on giants too. They recently took credit for forcing the Herald Sun (a newspaper owned by media giant Rupert Murdoch) to its knees through a relentless campaign of shitposting in their comments sections. The Herald Sun was forced to eventually completely remove all of their Facebook posts from their page. Solidarity across the ditch in shitposting.