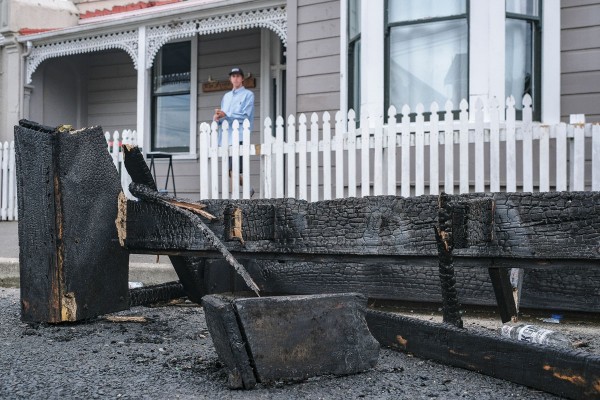 University Proctor Dave Scott, a man who has seen some shit, was not too put off by this rise. “In the bad old days, we were having this number of fires in a month,” he said. In 2014, 30 fires were recorded in February alone.

In the early 2000s, when the alcohol age was lowered to good-old 18, couch-burning incidents increased to 360 per year. Senior Station Officer Rob Torrance said this era saw the highest number of call-outs to individual fires in one night, with 19 separate incidents. With each couch fire taking up to 20 minutes to deal with, Rob says a busy night can tie up the city’s resources.

The cause of the 2019 surge after a long cooling down period is unclear. Some days, Dave said, are so singularly busy that they statistically “blow out the year”. Saint Patrick’s Day alone, occurring on the Sunday after the Christchurch terror attack, was one of the busiest days for couch fires in 2019.

“We are still in a good place,” Dave said. He believes the overall downward trend in couch fires since the introduction of University initiatives, like Campus Watch in 2007 and the updated Student Code of Conduct in 2014, is still an important indicator of “a massive change in student behaviour”.

In 2019, eight students were disciplined through the Student Code of Conduct for couch burning offences instead of facing the legal system and a possible conviction. “If we can keep students out of court – that’s really important,” the Proctor said.

Looking to the year ahead, Dave said Campus Watch would be “educating and talking to students where we can” about the dangers of lighting fires. He recounts how a student in 2019 suffered facial burns from trying to light a cigarette over a flaming couch that suddenly exploded. There were some “near-misses” in 2019 where houses could have been burned down, he said.

“You do not want to inhale any of the smoke whatsoever,” Rob said. “It is carcinogenic, it is not good for you, full stop. You’re putting yourselves in real danger.”

“This behaviour is a cost to the taxpayer,” the Proctor said. “I don’t understand why it’s seen as something we do in Dunedin.”

Didn’t catch it live? Listen to the podcast at r1.co.nz/podcasts.