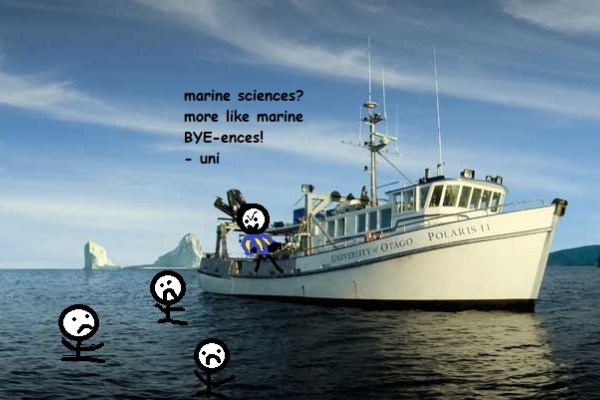 “The loss of even one staff member will leave a hole in our ability to grow that next generation. It’s a painfully short-sighted decision from the university.” - Anonymous staff member

Students and staff are rallying against a “management of change” (MOC) proposal which would result in significant cuts to staff and papers in Otago’s Marine Sciences Department.

An anonymous academic from the department told Critic they felt the cuts were ‘ironic’ when “Otago’s Marine Science Department is really on the front lines of the climate crisis” and there are more jobs and research opportunities in the field than ever before.

The anonymous academic said this proposal was “a painfully short sighted decision from the University” when the very students they teach are “who New Zealanders will rely on to offer solutions to the biggest environmental challenges facing society today.” They said, “because our department is so incredibly multi-disciplinary with a huge diversity of expertise, the loss of even one staff member will leave a hole in our ability to grow that next generation.”

The proposal, which was submitted by Pro Vice Chancellor of Sciences, Richard Barker, was finalised following a staff consultation. He said that “staff submitted collectively” to cut their undergraduate paper offerings from twelve papers to nine or ten. He said that these remaining papers, plus the typical research and study leave, absences, and postgraduate supervision, “could be delivered” with approximately 8.0 or 9.0 FTE academic positions.

Barker said the aim of these changes is to “ensure flexibility” and “consolidate technical support” within the department. The proposal also repeats the word “sustainability” and “future growth” a lot, referring to what a spokeswoman told Critic was the department’s “unsustainable” operating deficit.

Undergraduate students were told of this proposal on Monday during class time. Tayla Hill said she expected class to be “like any other day”, only for her lecturer to enter the room “looking visibly distressed.” Before class began, the lecturer announced that they had received a proposal to cut staff only the Friday before. Tayla said there were almost “tears in her eyes” and could hear “the lump in her throat as she spoke about how her three of her colleagues will be losing their jobs.”

The timeline of consultation spans from the 4th of October until the 25th of October; during exam time. The proposal said “during this period of consultation, the University will also engage with students and other relevant stakeholders.”

Tayla said the University had not yet consulted them. Instead of waiting for them, however, she decided to “act first”, and launched an online petition. The petition has amassed well over 1,500 signatures in the two days it has been live.

Despite having an essay due in a week and an exam two days after, Tayla said “I’ll make the time to fight for them … We are literally a family.”

“I don’t think [the University] realise how important and emotional this has been to students,” she said.

Tayla also said it was “a shit time” make cuts to a department and staff “who dedicate their lives to studying climate change, right at a time where Dunedin just declared a climate emergency.”

A statement on the petition says “If you want climate change action, we need to support and invest in our researchers and future climate scientists. The university has claimed they want to take strong action against climate change. This move is in total opposition to this claim.”

Barker responded to this, and said, “the science of climate change is the subject of teaching and research from departments across the University and continues to increase in emphasis. This will not change.”

A University spokeswoman said that the student consultation is happening “currently.” Tayla, who is in touch with a vast array of affected students, responded “Lol actual bullshit.”

Unlike the undergrads, postgraduate students in the department were aware that an MOC proposal was on the way, but had no idea how significant the cuts would be.

Leonardo Durante, a Marine Science postgrad student, called the proposal “very scary.” He said that as students were only now being told exactly what changes might occur, that there would be no time to process and adapt to them.

Maddy Glover and Stina Kolodzey, both postgraduate students in the department, both said that this proposal would have immediate ramifications for the diversity of options and knowledge within the department, and would affect student numbers.

Stina said “often students come because they want to study with a particular staff member. We have no single person with the same field of study or expertise in the department, therefore cutting three people means cutting three fields of study that are available for students.”

Leonardo also called the proposal to half the Marine Science technicians “crazy.” He said the workload for the two extant technicians was “unbelievably large” and that most students agreed they were often “shorthanded.” He said “it is clear to me that those ideas came from someone that has no idea how complex marine science is and how much support you need to have to get a single study done.”

Barker has also proposed that academic staff from “other departments and programmes” would begin supervising Marine Science postgraduate students.

Stina said that so long as relevant expertise was kept in mind, increased co-supervision in the name of splitting costs made sense - particularly as marine science is “as diverse as the ocean is.” However, if it resulted in a loss of knowledge, she said it would “consequently cost the department opportunities and reputation and will likely make students pick other universities.”

A University spokeswoman said the Department of Marine Science “is a vital, research-led programme known for excellence in teaching and research” but “has been under financial pressure for some time” and that “its current operating deficit is unsustainable.” She said a “return to a strong financial base will future-proof its position.”

All students Critic spoke to are adamant that the proposal is not a long-term solution for the department’s debt. Maddy and Leonardo both said that cutting staff and assets would only serve to make future trips “more expensive” and leave remaining staff and students “unhappy.” Leonardo added that “current students always talk to prospective students, do you think Otago will be their first choice after these changes? I would prefer to go to Victoria.”

Stina said, “I understand that there have to be changes to the budgeting, but cutting internationally renowned scientists, shortening opportunities and diversity for current and future students in a world and time where natural science is important as never before; I truly believe this can’t be the way to go. This can’t be the advertisement Otago wants for itself, every other university is funding science and Otago wants to cut it? This is not why I came here.”