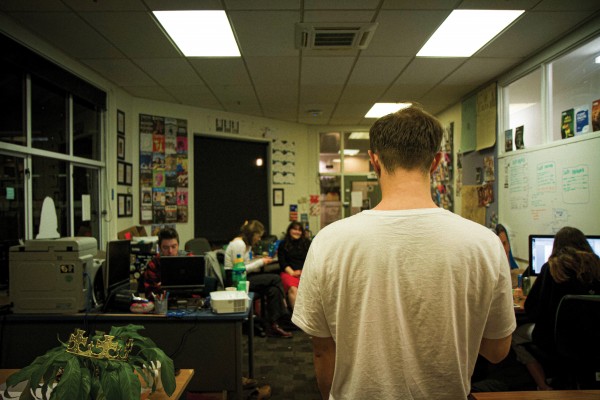 Critic has been around for 94 years. Over that time we’ve changed dramatically in every way possible. We’ve gone from a journal to a newspaper to a magazine. We’ve been wildly successful and we’ve been mediocre and we’ve been absolute shit.

I’ve worked at Critic for the past three years. I was sub-editor in 2017, and seeing the amount of issues that came back unread every week was heartbreaking. If I physically saw anyone reading the magazine it would make my week. It felt like we were just making a magazine for ourselves. But these last two years have been a wild ride. We’ve almost doubled our print run, our stories regularly make national news, and people are actually reading the magazine.

The first page of the big document that gets passed from Critic Editor to Critic Editor, starting with 2002 Critic Editor Patrick Crewdson, is just three words in 96 point font: DON’T BE BORING. Despite the impressive font size, some Critic editors clearly didn’t read this. There were years where Critic was fucking boring. In 2014, Harlene Hayne told the OUSA Exec that she was “now comfortable to leave a copy [of Critic] on an airline whereas previously I would not”. The ‘previously’ she’s referring to here is 2011/12 Critic, which was the fucking best. 2014 was the start of three years of decline in Critic’s readership. Turns out Harlene doesn’t have great taste in Critics.

There’s no way that Harlene would have left any of this year’s Critics on a plane, if she’d even have taken it on in the first place. If this is my only achievement in life, I’ll die a happy man.

This is the last issue of Critic for the year. It is also my last issue as Editor. I’m stepping down to concentrate on my dream of competing at the World Nomad Games, the Olympics of traditional Central Asian sports, which include firing arrows with your feet, riding a horse while on fire, and a team sport where you’ve got to get a dead goat into a paddling pool from horseback. Mostly just the Central Asian countries enter, but a bunch of others send teams, including the Philippines and the United States. New Zealand has never sent anyone, so qualifying shouldn’t be too hard. Anyone who wants to join my team, tryouts will be on the Union Lawn 2pm Tuesday (byo horse).

I love Critic, I love the people who make it with me, and I love all of you for reading it. It has been an honour to work for you.

It’s in your hands now. Keep Critic alive for me. In five years when I’m flying back from Kyrgyzstan, I don’t want to find that Harlene’s left a copy of the latest issue on the plane.