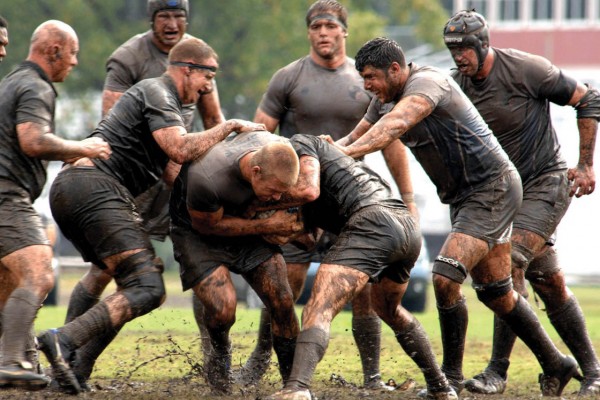 Homeopathy hopes to participate next year

Physiotherapy students have proved that they are about more than just feet after last Sunday's cracking-good rugby game against the Otago University Medical Students’ Association’s team, the ‘Teratomas’ (gross medical word for a gross tumor made up of different types of tissue like hair and teeth and bone). The Physio Women aced their 7s game with a 35-0 win, while the Physio Men won their 10s game 46-5.

In the womens’ match, Physio dominated from the get-go. They diagnosed the field, set up a management plan, masaged the cricks, manipulated the mechanics, and achieved a healthy triumph.

Lucy Garner, who plays for Physio, told Critic “It was an awesome game, both sides thoroughly enjoyed it and for most of us it was fun trying something a bit different”. Garner also spoke of “big tackles, a couple of epic fends,” and “good runs” in the match. There was also a neat cross kick, which pleasured the sideline.

Garner said there were some “big hits” in the mens’ match which was also defined by the knocks dealt between the two faculties. In one instance, Callum Hill of the Teratomas — a self-described “social player” — had to vacate the pitch after suffering an acute haemorrhage from his nostrils while attempting his first try for the ‘Tomas.

“Yeah mate, I fully got rolled,” Hill told Critic. “Fair play though, they were big lads. I guess a loose arm to the face from a lad 20 kilos your senior tends to stop you in your tracks pretty quick.”

Hill also said that his nose-basher apologised about it during half time and offered to buy him a beer from Starters for commiserations. “What a champ. It’s attitudes like that that keep social games like this going.”

Critic also spoke to Teratomas (yuck!) captain and an organiser of the games, Seamus Leahy, who said, “the match itself was fairly one-sided to Physio. To their credit, they played well and have a fair amount of good footy players.”

Yet even though the Teratomas may have been benign (thank God), all in all both matches have been hailed as a howing success in having fun.

“It was a good chance to have some inter-professional bonding and also a good run around for the med lads who miss the footy days. Most of us haven’t played since high school footy days apart from the odd match for our halls,” said Leahy. “It’s a good chance to shake off the dust.”

Jess Stanners of OUMSA also assisted in organising the matches. “It was a good chance for inter-faculty bonding and, at the end of the day, rugby was the real winner.”