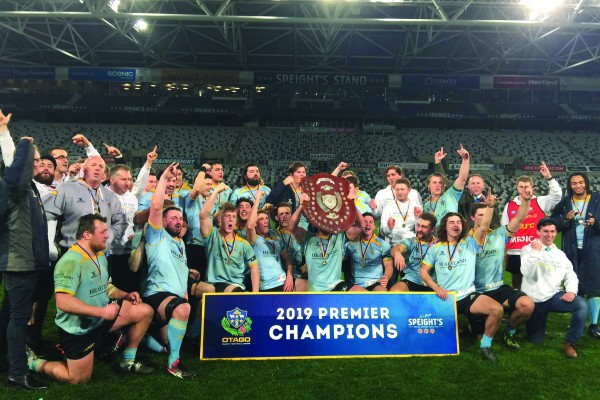 The Pirates were the favourite going into the women’s match, having won the last encounter 21-19. Additionally, Georgia Mason, the University’s open-side flanker — described as ‘without peer in Dunedin’ by team manager, Terry Kerr — was absent with injury. Nevertheless, the game plan was simple: keep the score gap small in the first half and shine in the second.

The bulkier Pirates side had 85% possession in the first 20 minutes, and built up a 12-0 lead. But University carried out some brilliant and brutal tackling, led by captain Tegan Hollows. The question was ‘could the Pirates pace up, and did they have the skill set and fitness to do so once University begun to get possession?’ Kerr’s answer was “no”.

University leveraged their greater agility and skill to dominate the field positions. It seemed that half-back Rosie Kelly’s kicking propelled not just the ball but also the team forward. Inroads were made with a break and fend by Meg Breen down the left flank, moving to Trish Hopcroft in the wing, and then to flanker, Bree Thomas, with the score.

Soon after, the quick work of the University side spread the Pirate’s defence like butter. A ruck formed but, with the shell-game tactics of a marketplace gypsy, the ball eluded the Pirates, found its way into Kelly’s hands who went untouched, scored seven, and put the game 12-12.

The pressure intensified and University fell behind with an unforced error, putting the Pirates in the lead 19-12. On the other side, the Pirate’s centre (and Black Fern), Kilisitina Moata’ane, was involved in a mid-tackle hair grab, but was not yellow carded. A penalty put University in place for a series of attacks, but the score didn’t budge before halftime.

In the second half, University strategy led them to score another remarkable try, putting them in the lead 24-19.

For the remaining time, the Pirates found their score stuck at 19 as University worked their way through the Pirate’s defence. A scrum led to Breen solidifying University’s 10-point lead, but it was the entire team who achieved the final 32-point win, and upset the typically dominant Pirates.

“I was excited and privileged to be a part of history as part of the first women’s club team to play on the stadium,” Rosie Kelly told Critic.

“While Pirates attacked hard, they were increasingly bereft of ideas in the face of stiff University defence,” said Kerr. “It was the superior fitness, collective skills, mobility and clarity of purpose that saw University claim the banner for the 18th time.”

The women’s win was followed up with a narrower victory for the men. University and Taieri traded penalties before University went on the attack and dominated the first half. Tyler Berry scored, and Taylor Haugh did so twice. With a conversion, halftime saw University ahead of Taieri, 31-3.

In the second half, Taieri came back with two converted tries, and a long-range penalty was missed by University. Going into the final quarter, the score was 31-17. In celebration of Taieri’s improvement, a supposed streaker took to the field, though he forgot to ‘streak’ and presented no cheek nor nipple to the crowd, and his failure to show even a mere cheeky little bit of shoulder meant he was pretty shit.

Taieri butted their way to 31-31 with just 5 minutes left in the match but, in the dying minutes, it was a kick by Angus Williams which sent the boys ahead to win, and take the oversized silver-spangled shield that all the grab-ass ball play was for. Henry Bell and Taylor Haugh were awarded Players of the Match.