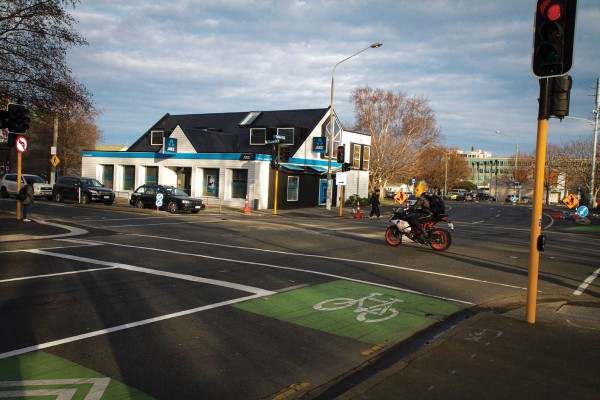 Take your lady by the hand

Two more ‘Barnes Dance Crossings’ are being installed in North Dunedin in the next three weeks. Barnes Dance is a really lame name for those crossings that let you cross in any direction and have a flashing countdown that lets you challenge yourself to see if you can run across with three seconds left.

The Dunedin City Council has installed eight Barnes Dance crossings in the past 18 months but they haven’t changed the name to something cooler yet.

A local road worker shed some light on the name: “It’s not a barn dance, it’s named after a guy whose last name is Barnes. Everyone is doing Barnes’ dance.” Another worker contributed, “nobody barn dances anymore”.

The new crossings will be the final stage in completing the Transport Agency’s one-way cycleway project, which is driven by a desire to increase the safety of pedestrians and cyclists on the busy roads, following the death of a cyclist in 2011 and another a year later.

Transport Agency Senior Project Manager Simon Underwood said “We encourage everyone to be considerate at these crossing points and for cyclists to slow down, bearing in mind that pedestrians have the right of way at all pedestrian crossing points”.

The Transport Agency’s Fulton Hogan team has also begun the kerb work needed for a Barnes Dance crossing at the Cumberland Street and Albany Street intersection.