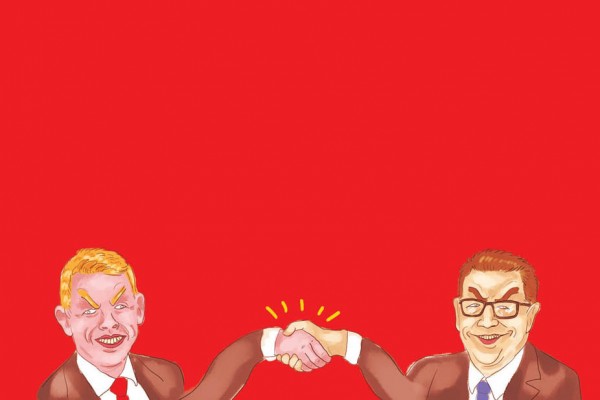 Government Will Not Repeal VSM This Term, say Student Lobbyists

Critic forced to explain VSM for the millionth fucking time

OUSA Exec members Will Dreyer and Bonnie Harrison have said that Finance Minister Grant Robertson and Education Minister Chris Hipkins will not repeal Voluntary Student Membership (VSM) in this term of government.

OUSA Finance Officer, Bonnie, said “it seems abundantly clear from Grant Robertson and Chris Hipkins that repealing VSM is not on the cards for this term at least”.

She said Hipkins spoke at an NZUSA hui late last year where he said that VSM was not a first term thing and not something Labour could currently do.

Because we’re fucking tired of explaining VSM every time we write about it, here’s the same explanation we used the last few times:

VSM was introduced by the ACT party back when it was actually a party and not just David Seymour yelling into the wind. It essentially meant that rather than students directly funding their students’ associations, we switched to Service Level Agreements (SLAs), where universities charge the same fee that students’ associations had previously, and then used this fee to hire the associations to provide roughly the same services.

OUSA was basically the only association to survive VSM unscathed. We’re lucky that Otago Uni appreciates the value of OUSA’s services – things like academic advocacy, Queer Support, class reps, the foodbank, the hardship fund, clubs grants, R U OK, $3 lunch, recreation courses, and even things like O-Week, Radio One and Critic (although we are largely funded by ads).

Anyway, OUSA Education Officer, Will, said “basically, repealing VSM [is] not going to happen as universal student membership has the same ideological flaws that allowed ACT and National to repeal it in the first place”. One of those flaws was accountability about how that money was spent. For example, in the 1970s during the Vietnam War, 2,000 Vic Uni students participated in a general meeting to confirm the donation of $2,000 to the Viet Minh for them to purchase a tank. Apparently ACT and National weren’t too happy about that. But damn, that’s ballsy. Plus, 2,000 students was one third of Vic Uni students back in the day so, that’s kind of your accountability right there. Critic defends all purchases of military vehicles by student associations.

While Bonnie said that VSM was imperative, “there’s only so much you can do with that [anti-repeal] mood in government”.

Will said that while “it is frustrating Labour isn’t doing more when they campaigned against VSM in the first place”, he said it was “not particularly a shock they haven’t done all they promised”.

Seeing as a straight repeal isn’t on the table, Will and New Zealand Union of Student Associations (NZUSA) President James Ranstead are researching an alternative model that doesn’t have “flaws” with accountability. The proposal will be for a government centre called the National Centre for Student Voice that will take money from the unis and pass it on to Student Associations, establishing a minimum amount of money unis have to give their associations. While OUSA wouldn’t see significant benefits from this, it would be a godsend for the associations that were gutted by VSM.

Will said they’re trying to propose “something that effectively repeals VSM, but that’s not a straight repeal”. They’re currently in talks with Labour backbencher Jan Tametti to get a bill to that effect put forward.

Bonnie said, “When your long term goal is to repeal VSM, and people in charge say we’re not going to, what are you gonna do now? Make best you can possibly do in the meantime.”