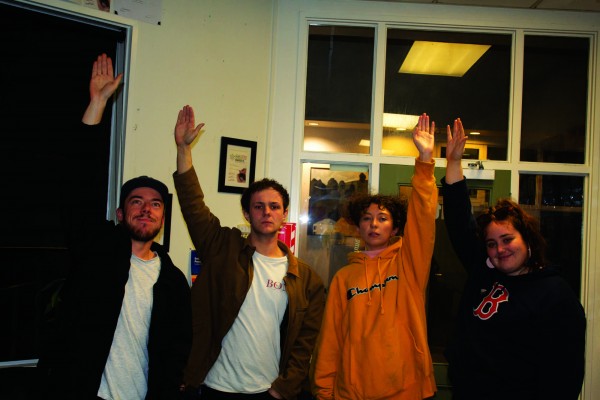 The OUSA Referendum is always boring as shit and no one ever submits any questions. Mostly because it seems like it takes actual time and effort and requires a passion for student politics that most people simply don’t have.

The thing is, it’s not that hard to get stuff added to the list of questions, and if you do that there’s a pretty decent chance it might pass and then they’ll have to do it.

Last year Critic got people to send us things they want to see on the referendum and we submitted a glorious list of 18 questions on your behalf. Questions included whether OUSA should make Sexy Garfield its official flag, whether the OUSA Clubs and Socs Centre be converted into a multi-story gay bar, and whether OUSA should make ‘Give it Up’ by KC and the Sunshine Band its official theme song.

Then something truly horrible happened. Pretty much all our questions were vetoed by the OUSA lawyers for being actually fun.

Honestly, we were crushed. It was the day our faith in democracy died. I personally wept. I wept for political suppression. I wept for OUSA. I wept for not being able to vote on whether the stegosaurus be adopted as OUSA’s official dinosaur. I came out of that experience with a colder heart.

HOWEVER, OUSA President James Heath said recently that this year OUSA would allow “some silly questions past the lawyers,” and I intend to fully exploit this, even if it means revisiting last year’s trauma. I have chased up James since and asked him whether all “silly” questions were going to be accepted, and if not, how he was going to decide what goes through and what doesn’t. He didn’t give me a proper answer.

Even though I suspect we’re just going to be burnt again, Critic’s bringing back our special, extra-exclusive offer: if you send us something you want to see on the referendum, we will reformat it and write it into a formal proposal, as well as speak to it at a Student General Meeting, so that you don’t have to do any of the work. Just come up with any half-baked idea for something you’d like to see OUSA do, send it to us at critic@critic.co.nz, Snapchat (username: criticmag), message us on Facebook, message me personally on Facebook, text me (0221215582), send a letter to my flat, 21 Fea Street, hang around a Critic stand until I’m drawn like a moth, fucking send out some smoke signals; as long as you get it to us, we’ll do the rest.

The questions that I’m personally submitting include:

I am very much looking forward to James keeping his promise and seeing all of these, and whatever other questions get sent to me, in the next OUSA referendum.